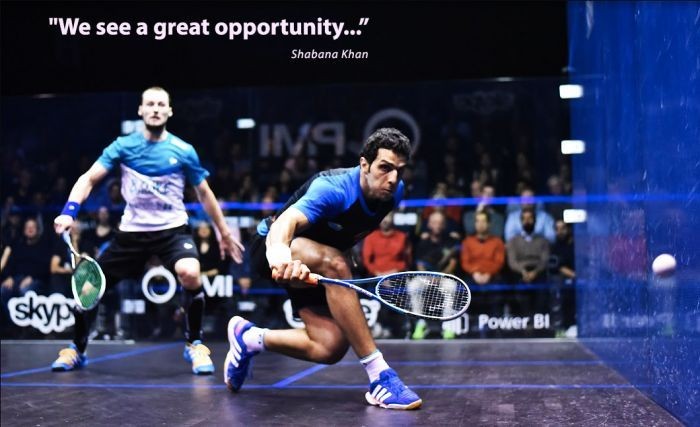 Two men who built global reputations in their respective industries have come to be viewed as the dedicated heroes advancing the sport of squash in this region by way of their financial support for the India-born queen of promoters of the sport who is making the Eastside a growing international center for squash.The two are Dave Cutler of Microsoft, key developer of Windows NT and all subsequent Windows versions, and Robert Harris, founder, and CEO of PMI-Worldwide, Seattle-based brand and product-marketing company with offices around the globe. 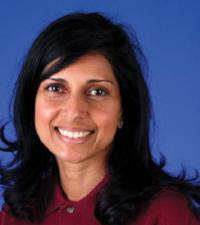 Shabana KhanTheir support has made possible the string of international squash events put on by Shabana Khan, who has become one of the foremost creators and promoters of squash events, all held in Bellevue, thus making the city increasingly known throughout the world in places where squash is a prominent competitive sport.And again this week, Khan, with the support of Cutler and Harris, is putting on a first-of-its-kind squash event, this one at the Hidden Valley Boys and Girls Club field house, which has become her venue of choice for her events.Cutler and Harris have decided to name the week-long world invitational squash tournament for top squash talent, six women and six men, the only event of its kind in the country, after Khan's late father.Yusuf Khan, who brought the sport of squash to Seattle from his native India a half-century ago when Shabana Khan was still an infant.  As one of the world's top squash professionals, Yusuf proceeded to bring Seattle to the attention of the national and international squash establishments and see two of his daughters become women's national champions. He died last October at the age of 87.  Thus the "PMI Dave Cutler Presents The Yusuf Khan Invitational" is playing out this week with the finals Friday evening. An added attraction is what Khan has dubbed "The Tech Challenge," with eight two-person teams from tech firms in the region competing in what Khan intends to make an annual part of her tournaments in the future.As has become the norm for Cutler's and Harris' involvement, the two are teaming up for a $150,000 donation to provide the major share of the $300,000 purse. The winners of both the men's and the women's competition will each take him $80,000.The financial support by the two has been the key for YSK Events, the little non-profit through which Khan puts on her squash events.Readers of The Harp will recognize that I've written about Khan before, beginning when she brought the Men's World Squash Championship to Bellevue in late 2015, first time the event was ever held in the U.S. The reason for the repeat visibility is out of a conviction that what she is seeking to do for Bellevue, and its young people in particular, merits far more attention and support from the community than she has been able to generate. When I first wrote about Khan, now 50 and the mother of 13-year-old emerging squash star Yasmin, I noted that she had won the U.S. women's national championship by defeating her younger sister, Latasha, who held the title, thus creating a "best in the family, best in the nation" outcome.The PMI Cutler tourney this week follows last May's Bellevue Squash Classic, the third year Khan has put on that event as part of the PSA World Tour. It was an especially significant event and a milestone for the PSA World Tour as it was the largest ever prize-money purse for a 16-player draw.Come fall, Khan launches her West Coast Squash circuit designed to make it easier and less expensive for parents and their children to compete at a high level and gain points toward national ranking. Two tournaments will be at the Redmond Pro Club, where Khan coaches and which has been a regular sponsor of her events. The first of those will occur in late September or early October to launch West Coast Squash. Other cities participating and holding events will be Vancouver, B.C., The Bay Area, Orange County and likely Portland.So back to Harris and Cutler, who a decade ago was recognized as a National Medal of Technology and Innovation laureate, perhaps the most prestigious honor in the country for developers of new technology. Cutler expresses frustration at the absence of other support for what Khan is seeking to do for squash among young people in particular.And he suggests that her involvement in the past few years may have something to do with the fact The U.S. has the fastest growing squash participation in the world, which the Sports & Fitness Association (SFIA) estimates at 66 percent growth overall since 2010 to 1.7 million squash players around the country.Regarding Harris's support, I was struck by a previously quoted answer when I asked him why he was such a strong supporter. And his answer bears repeating and maybe echoing."It's pretty simple," he said. "In a world beginning to look inward rather than building international alliances and global partnerships, I believe it's increasingly important to support sports that are global in nature and connect people from around the world. This is the only way humanity and our planet is going to survive and prosper."