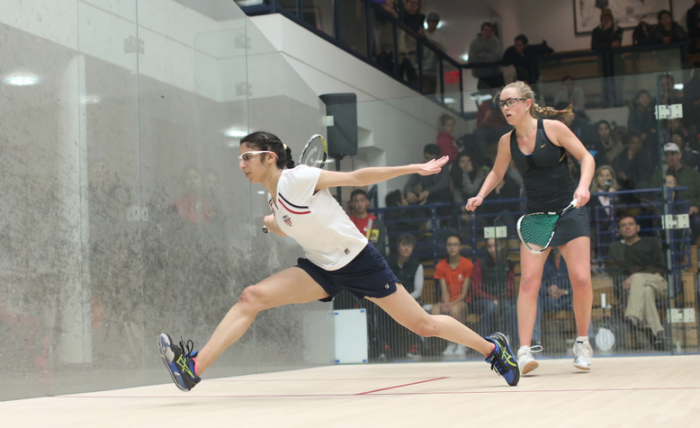 Reeham Sedky admits she was speechless, although stunned would be a more accurate description of the fans' reaction when the college senior from Bellevue upset one of the five best women squash players in the world at the PMI Dave Cutler Bellevue Invitational squash tournament last week.

Reeham SedkyThis isn't another Harp about squash but rather a column meant to convey, to those who might doubt, that the characteristics of commitment and perseverance treasured by older generations are no less evident in the generation just now coming of age.

Sedky's upset of New Zealander Joelle King might not as been as big a surprise, however, to those who've watched her progress as she became the best high school women's squash player in the nation, then on to the women's national collegiate squash title last spring as a junior at University of Pennsylvania.

Particularly not shocking to those aware that as a college sophomore she was honored at the U.S. Open Squash Championships with the 2016 United States Olympic Committee Athlete of the Year Award, the year she made her debut on the adult national team at 2016 Women's World Team Championships in Issy-les-Moulineaux, France.

Reeham: Winning the first round
Sedky, 21, whose father is from Egypt where he played squash and now works at Amazon, was born and raised in Bellevue and attended high school at Forest Ridge, says she started playing squash when she was eight and spent two to three hours a day practicing, though there were no other girls who knew how to play squash.

So, like many youngsters devoted to squash who have the support of their parents, she traveled around the country to squash tournaments where she eventually earned the title or national high school champion.

Sedky said of the New Zealander, "I actually had watched her play as I was growing up."
"I think she was pleased to see me win since she is supportive of the fact there are up and coming women professionals," Sedky added. "There are a lot of women my age, their early 20's, playing on the squash pro circuit." 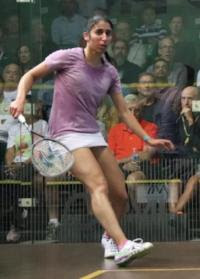 She said she has known Shabana Khan, the one-time national women's squash champion who put on the Bellevue classic last week since she was 7 years old.

Sedky headed back to college last weekend for her senior year studying computer science. She'll be defending her national women collegiate title next spring, then plans to turn pro after she graduates. As an aside, Sedeky often practices by competing with the male squash players at UPenn.

Thus, since Khan plans next year to put on the round-robin classic for which last week was a first-time event, Sedky may be on display for local squash fans next year, and perhaps attract more visibility for herself, and for the event, than was apparent from the local community this time.

Meanwhile, Khan is envisioning a repeat of the round robin, again involving the top men and women squash professionals in the world, as a lead in to her launch in the fall of 2019 of West Coast Squash, essentially a tour of 10 western cities to showcase youth squash. She has gathered support from coaches and parents in cities across the West to launch West Coast Squash.

The round robin event put on at the Boys & Girls Club in Bellevue's Hidden Valley was de ja vu for those who watched Frenchman Greg Gaultier win the Men's World Squash Championship, a first time in the U.S. event that Khan put on in 2015. Winning all his matches in that tournament and all his matches last week means he's never been beaten in Bellevue.
Tweet
Tags:
Mike Flynn Economic Development people
Shared global grief for us on 9/11 deserves being ...
International talent on display in Bellevue at wee...