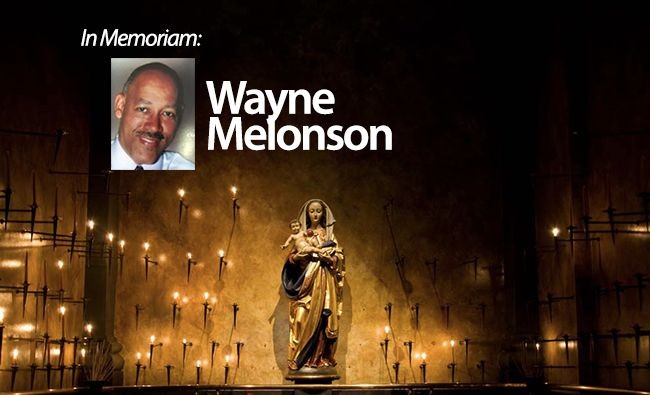 It takes the funeral of a prominent community figure to attract the number of friends and mourners necessary to fill the four arms of the cross-shaped St. James Cathedral in Seattle, the seat of the Roman Catholic Archdiocese of Western Washington.That was the case three-plus years ago when a packed cathedral said goodbye to Robert Craves, an original Costco executive and Founder of the College Success Foundation. And it was true 20 years ago at the last farewell to PEMCO CEO Stanley O. McNaughton. Those are the two I'm aware of. But it was the leader of a different sort whose funeral filled the cathedral to capacity last weekend. The prominent of Seattle's minority community and the families of kids who were guided and counseled by Wayne James Melonson during his 40 years as a teacher and administrator then principal of St. Therese School in Seattle's Central Area were on hand to say goodbye to him. Melonson Was 67.Seattle's black community, with a sprinkling of white faces like those of my son, Michael, and mine, filled the church to capacity, proving that prominence and influence are not necessarily the same but can be of equal importance in the creation of community. Wayne had influence in a way that defined the word.As an African-American who grew up and spent his student and professional life in Seattle's then mostly minority Central Area, Melonson was particularly sensitive to the needs of the minority kids, which prompted growing numbers of their parents to seek out St. Therese as the place they wanted their children to be educated.But on occasion, when he caught a couple of kids engaging in a fist-fight, it was not unusual to see him come quickly to wrap his arms around the necks of both boys and squeeze as the two heads stuck out of his cupped arms. The kind of discipline not available to teachers in public schools seemed to serve the growth and maturing of the St. Therese students pretty well.Wayne and his seven siblings grew up two blocks from St. Therese School, where his grade school education there was followed by high school at O'Dea and then Seattle University. It was there, while still a college student, that he became a part-time physical education instructor at St. Therese.After graduating from SU, he joined the St. Therese faculty. Before long he was an administrator and soon principle, the role in which our family first encountered him when we returned to Seattle from California.Wayne believed that in addition to academic focus, athletic competition was a way for kids to learn success and it was in that capacity, as he coached the St. Therese All-Stars, that part of his impact came to be felt. He believed athletics gave kids the opportunity to reach beyond their confidence.So as Michael and I sat listening to the memories of his contributions being shared, I was reminded of the time that Michael and three of his young black friends learned a lesson about reaching beyond their confidence level. They were seventh graders and Wayne decided their 4-by-100 meter relay team would compete against the eighth graders in the all-city meet.Michael ran third and by the time he got the baton, St. Therese was about 80 meters ahead. Michael added about 30 meters to that lead, then he passed the baton to cleanup runner Pellar Phillips, but he stepped on Pellar's shoe as he handed off the baton.  As Pellar started to head toward the finish, he suddenly realized he only had one shoe so ran back and knelt down to put it on, giving time for the trailing teams to get within about 50 meters. But with his shoe back on, Pellar took off and won by about 80 meters. All four kids eventually competed in track and field at the college level, largely because of Melanson's training.His impact reached beyond St. Therese since he was on the boards of O'Dea High School, Seattle Preparatory School and Forest Ridge School.Gary Melonson, a broker at Oppenheimer & Co. in Seattle and one of Wayne's seven siblings, recalled how Wayne and Regina Hickman, who would be his wife of 35 years, first met. If there's a marriage made it heaven, it may be one where a priest is present for the introduction.In this case, in 1977, Wayne was the priest. Actually a Halloween costume. As Gary this week recalled the story, which Regina confirmed, she was a student at the University of Washington who had a part-time job at the Urban League of Seattle, which decided to have its Halloween Party at the St. Therese Hall.She remembers that the League had to get permission from Wayne to rent the hall and he decided to attend the event and his Halloween garb was the outfit of a priest while Regina wore her Garfield High School cheerleader outfit. He asked her to dance and when the event was ending, he approached her and asked if he could have permission to ask her out.She said yes and they were married five years later and they had three sons.Wayne's Catholic faith was an essential part of who he was and he instilled the importance of faith in his students.As one of his students said of him, "he loved each of us fiercely. And he made us love one another even when we didn't want to."

Tags:
people Schools Mike Flynn
Spellman was a governor willing to deny even the p...
The Harp Turns 10! Reflections on a decade of not...