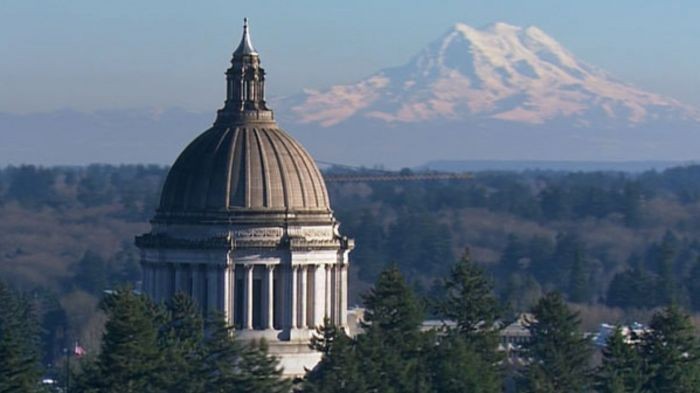 The battle for the nominations for the part-time position of Washington's lieutenant governor has drawn a cluster of hopefuls based in part at least on what some pundits see as the strong possibility that the governor's office could be a subsequent prize awaiting whoever wins the post in the November general election.

That isn't at all what the framers of the state's constitution had in mind when they created the position of an elected official to fill in for the governor from time to time and preside over the Senate when the legislature is in session. And hang around in case the governor died or was incapacitated. Or, as with Inslee, a possible appointment to a Biden administration, should there be one.

That limited constitutional role made it historically a job coveted by those who first made a name outside of politics, then sought an easy ride into a job most voters likely don't really pay much attention to.

Thus this year is only the third time in the past century that a person running for lieutenant governor nurtures the hope that winning the job could lead to becoming the next state chief executive, sooner rather than when Gov. Jay Inslee completes the third term for which he's now running. And has promised to serve out.

The "sooner" looms like an apple hanging from the tree because of the much-discussed possibility that if Joe Biden is elected, he would tap Inslee.

The interesting side note is that by the time Biden could win office, Inslee's image could be badly tarnished as the effort unfolds to tie him tightly to the state's employment security disaster that has devastated the lives of thousands of state residents forced to wait endlessly and needlessly for their unemployment checks.

Inslee's protection of his employment security head Susan "Suzi' LeVine and avoidance at press gatherings about discussing the disaster and LeVine's role in it will be made an issue in the governor's race. And if Inslee's image begins to tarnish, it will be interesting to watch how the four Democrats in the lieutenant governor's race handle questions about the unemployment disaster.

But back to the race for the $115,000 annual salary position, a race that has attracted four Democrats, five Republicans and two Libertarians to this year's contest.

Three of the state's first nine lieutenant governors actually became the state's chief executive when the man who was governor died in office. One of them, Louis Hart, was elected to a full term after succeeding Ernest Lister in February of 1919, a month after Lister took office.

William Jennings (Wee) Coyle, a former UW football great and decorated war hero, started it all in 1920 when he parlayed his name familiarity into a landslide victory in the race for the state's second-highest elective office, openly indicating he hoped to become governor four years later.

Coyle was only 32, a handsome former UW star quarterback just back from the World War I battlefields when he strategized to use the lieutenant governor role to position himself to run for governor, a race he ran in 1924, but lost.

For most of the next 96 years, the office was held by those who had first risen to prominence beyond the political sphere.

It wasn't until Brad Owen, a Democrat and former state legislator from Shelton was elected in 1996 and was re-elected four times that a lieutenant governor created real importance for the position.

During his five terms, Owen created for the office the role of a goodwill ambassador for the state in international trade and promotion of Washington products overseas. The lieutenant governor also serves as chairman of the Joint Committee on Economic Development, Tourism and Trade. Plus Owen led trade missions to parts of the world where the title "lieutenant governor" opens doors.

But the history of the position has provided some interesting political lore.

The fact the lieutenant governor is often described as "a heartbeat away from the governor's chair" has seemed to hold little importance for Washington voters, despite those three early in the 20th century who rose to the top state office because of the deaths of the governors.

Colorful Victor A. Meyers, a mustachioed maestro who earned a reputation as a big-name band leader, decided to seek the office as a Democrat in 1932. He won and was re-elected four times before being defeated in 1952 by Emmett Anderson, who had gained fame as the "Grand Exalted Ruler" of the Elks.

Anderson, like Coyle, had hoped to use the post as a springboard to the governorship and made an unsuccessful run for governor in 1956 and lost to Albert D. Rosellini.

That allowed John A. Cherberg, a failed football coach at the University of Washington, to run for the job as a Democrat and win. Cherberg commenced a 32-year stand in the job that made him the longest-tenured lieutenant governor ever in the nation.

The most interesting effort to boost a non-politician into the job came in 1968 when then-Gov. Dan Evans and his state Republican chairman, C. Montgomery (Gummie) Johnson along with future U.S. Sen. Slade Gorton, then running for attorney general, hatched a plan to oust Cherberg from the office, which by then he had held for 12 years. The goal was to set the stage for the election of the first black man since reconstruction to become governor four years later.

I've written about Evans, Johnson, and Gorton seeking to boost the fortunes of Art Fletcher, a black city councilman from Pasco who had gathered some national prominence for the development of a self-help program in the East Pasco ghetto.

The effort by three Republican leaders, back in 1968, to create an opportunity for an African-American to have a shot at becoming governor needs to have a high-visibility role at this time, in particular, rather than being lost in Washington State history. I wrote a 50-years-on column in 2018 at Evans's suggestion, as he reminded me of "the Republican plot to get a black man a chance to be governor."

So Johnson talked popular and prominent hydroplane driver Bill Muncey into running for the post, once confiding to me off the record that Muncey had wanted to know what a lieutenant governor did. "Not a lot," Johnson had replied, with some honesty.

Fletcher won the GOP primary but failed to dislodge Cherberg in the general election. But a year later, thanks in part to the visibility Evans helped create for him, he gained a position in the Nixon Administration's U.S. Department of Labor, where he created the first Affirmative Action program

By the time he retired in 1988, Cherberg had built a reputation for integrity and even-handedness in his role as the State Senate's presiding officer. And with the election of Joel Pritchard, a respected Republican congressman, and former legislator, the job took on an increasingly important role that Owen continued to build on during his years in the office.

Incidentally, the state's top-two primary system doesn't guarantee any party a spot in the general election, so it would be possible for the votes to split in such a way that two Democrats or two Republicans could advance to the general. Election.

Deeds of Brien Wygle, like many in retirement, tucked away until his death brought recall