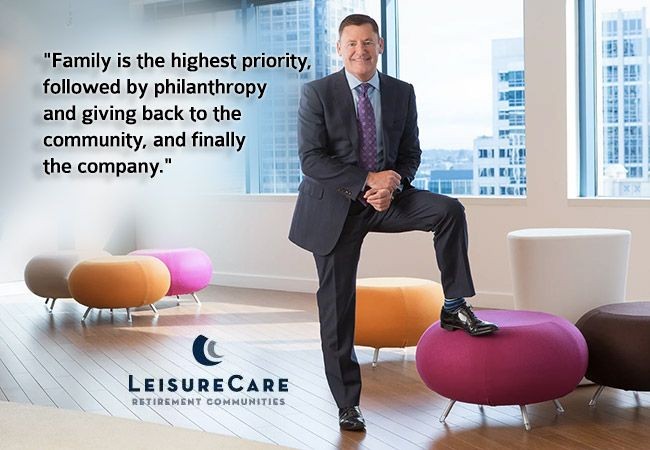 As Dan Madsen marks his 20th anniversary as CEO of Leisure Care, which he has guided to a position as one of the nation's largest privately held retirement and assisted living companies, he is unveiling plans for expansion into the U.K. and creating a dramatic new retirement-community addition to the Seattle skyline. 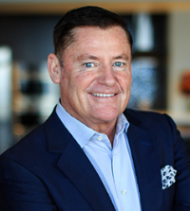 Dan MadsenOver the 30 years since he joined Leisure Care, founded in 1976 by Chuck and Karen Lytle, he has advanced from general manager of one of the communities to operations director, then CEO and eventually owner and took Leisure Care from a national player to one with an international presence.So now he's embarked on expanding that international presence, which currently includes senior communities in India and Mexico, into London, through a partnership with Elysian residences. The London venture involves the construction of four communities that will include what are described as "five-star hotel services" with Elysian as the developer and Leisure care as the operator.The Seattle community, which will be Leisure Care's 10th retirement community in Washington State but the first in Seattle, is Murano Senior Living, under development in the First Hill Neighborhood.  Murano, planned for opening in the fall of 2019, will be a 23-story retirement community described as "the area's premier senior living community" with independent and assisted living and memory care. It will offer what the company describes as"sweeping views of Puget Sound, Mount Rainer, the Cascade Mountains, and downtown Seattle from the top floor club room."Murano, with 243 units, will join the company's headquarters high up in the Wells Fargo Building as Leisure Care's downtown presence. Spread across the western half of the floor with Sound and mountains view as the backdrop the headquarters has workstations, meeting areas and bistro in an open concept where Madsen and top executives have no offices.  "I like to be in the middle of everything,' Madsen says with a laugh about guiding the company that is now the 5th largest assisted-living company in the country.Both the London projects and Murano exemplify Madsen's business model, which is involved with one or more financial partners in each development."We and our various partners have 16 properties under development around the U.S., and four in London, and two in Mexico," Madsen explained in an interview, noting that will give Leisure Care 40 communities "on a quick pace toward 50 and over $2 billion under management."Seattle-based Columbia Pacific Advisors and its founder and now chairman Daniel Baty, a well-known developer of retirement communities and health-care facilities, serves as Leisure Care's development partner in a number of markets.  As Madsen explains the process, "Columbia Pacific creates a fund for a community, I invest in the fund, which then hires a developer to do the building and contract with Leisure Care to operate it."Madsen has spent his career focused on aging and helping his customers push back against it. One innovation in that direction was his addition in 2008 of a hospitality model that he named Leisure Care One Eighty, which prompted one interviewer to observe "Leisure Care is the only senior-living provider that has a travel agency,""We had always been hospitality driven, but 180 allowed us to take hospitality and some of our other products and services and virtually integrate them in Leisure Care," Madsen said.It's far more than that from a business perspective since Madsen explains that One Eighty was designed to be a parent of several verticals "so the various companies, could operate from their own P&Ls, as well as have different investment horizons."But Madsen is quick to point out that the One Eighty name is significant for the company, not just as an unusual business model."The name comes from believing that we approach business differently, highly focused on the company culture of a 'three thirds' lifestyle," he said.  "Family is the highest priority, followed by philanthropy and giving back to the community, and finally the company."It was those family and philanthropic characteristics that led to the creation of One Eighty Foundation in 2010 as the vehicle for Leisure Care's community and nonprofit involvements.With the U. S. Census Bureau calculating 10,000 baby boomers turning 65 every day, and lifestyle adding years to how long they stay around and stay healthy, the need for long-term care isn't going away.And thus neither is the appeal of retirement living to investors. So private equity funds and REIT investments are continuing to pour into the business, causing senior living properties to continue to change hands, fueling both acquisitions and new developments."There's inevitably a bidding war and acquisition costs have continued to go higher and those realities have made the development of new buildings a higher priority than acquisitions for us," Madsen said, noting that 15 facilities are in construction around the country.In fact, Madsen's relationship with Baty's Columbia Pacific Wealth Management is bringing another Seattle project to get underway, likely next spring. It's a 40-story multi-family and retail tower near the convention center, except One Eighty is the partner in this one with and Seawest Development as a 50 percent partner with Madsen's investment in the project. There's a Horatio Alger quality to Madsen's rise in the organization from a 25-year-old Salt Lake City media sales rep with roots in Southern Idaho and having attended Dixie State University in St. George, UT. Hired to manage a Leisure Care facility in Salt Lake City, he moved through executive positions to operations director, then CEO a decade after his hiring, then buying the company in 2003.  How his purchase of Leisure Care played out was that Madsen became the owner of the business and the Lytles retained ownership of the brick and mortar as his landlords.  "The Lytles were my original bosses and we grew together over all of those years and It became good succession planning for them and a good opportunity for me," the 55-year-old Madsen said.