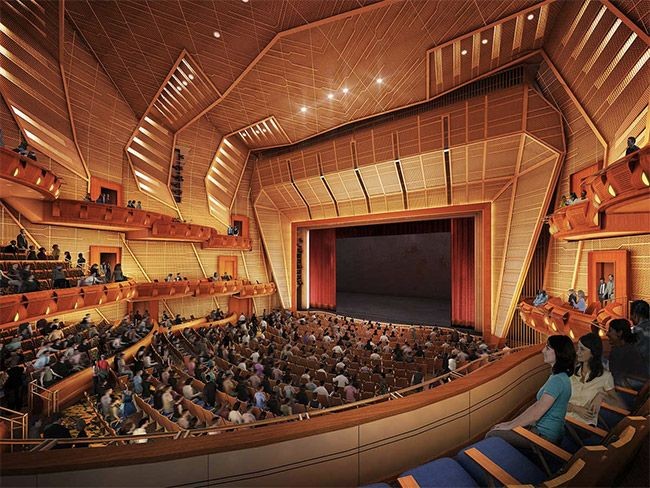 The final push is underway to bring the 25-year quest of Eastside community leaders for their own performing arts center to groundbreaking, likely in October, representing the symbolic final pre-construction step for the $195 million Tateuchi Center in downtown Bellevue.The Tateuchi board is expected to set the groundbreaking date at its June meeting, but there is a $52 million hill to climb to get to groundbreaking, a hill that Cathi Hatch, who has chaired the fundraising campaign and is vice chair of the board, plans to overcome with a "Topping off Major Gifts campaign."With $127 million raised to date, achieving that pre-groundbreaking total will leave $15.8 million, which Hatch says: "We will raise that during our Community and Small Business Campaign, which begins at Groundbreaking."Alex Smith, CEO of Kaye Smith Enterprises and Tateuchi Board chair, admits "there is a great deal of work ahead of us, but we have the tools in place and the fortitude to get it done."Indeed the idea of the center has guided supporters to overcome a number of challenges as the plans for the facility have gathered momentum, challenges that included the economic downturn in 2008 that caused some to begin doubting that the center had a future.Kemper Freeman, who has been a forefront and forceful supporter of the concept from the outset, noted that "We lost a lot of time to a difficult economy." That was when the Great Recession dropped its curtain on the economy and made some doubt that the vision of an Eastside performing arts facility would survive.

"In economic down times a focus on the arts is always the first thing to cool off," said Freeman. "But in good times, people want to give to the arts so it's a perfect season to finish this campaign on a high note." A major boost to re-energizing the campaign was a $20 million pledge by the Bellevue City Council in 2015.
But part of the community support for the center has come from the changing demographics and growth pressures throughout the region that have turned the Tateuchi from a competitor of Seattle arts, as once would have been the case, to a regional arts asset.

Hatch made note of that when she remarked in an email to me that successful completion of fundraising and opening of the facility in2021 "will enable Tateuchi Center to operate successfully as a first-class performing art center and arts education resource for our entire region."

"It was needed a quarter-century ago and all the growth and change not just on the Eastside but throughout the region since then have made this project even more necessary," said Peter Horvitz, immediate past chair of the Tateuchi board.

While the facility will be the venue for many Eastside performing arts groups, the collection of Seattle arts leadership on the Tateuchi advisory board is evidence that the Center is coming to be viewed by Seattle arts organizations as an asset rather than a threat.
Thus it is viewed as complementing Seattle arts venues like McCaw Hall, Benaroya Hall, the 5th Avenue and Paramount theaters while filling a regional need by providing a more convenient venue for Eastside residents while offering an Eastside platform for Seattle arts groups.

Horvitz, a longtime owner of what was the Eastside's daily newspaper who remains a key Eastside business leader and philanthropist, noted the impact traffic has had on a Seattle-centered arts community.

The changing attitude of Seattle performing arts leaders toward a Bellevue concert center is in response to an increasing reluctance of Eastsiders, who account for more than 50 percent of Seattle arts subscribers and Seattle ticketholders, to face the twin traffic challenges of Lake Washington bridges to Seattle and traffic tie-ups in downtown Seattle.
The strategy of Seattle arts organizations is to use the 2,000-seat center for the double benefit of attracting new audiences while helping retain existing ticketholders and supporters.
"It is increasingly difficult for Eastsiders to drive to Seattle for performances," Horvitz said. "As a result, Seattle-based performing arts organizations will have the opportunity to reach new audiences and retain current patrons by performing at Tateuchi Center. The addition of Sound Transit's light rail will add to the convenience of attending performances at Tateuchi."

When first envisioned, the facility that now carries the Tateuchi Family name as a result of a $20 million naming right pledge got its initial boost forward when the Kemper Freeman family committed the land on which the Center will be built. That was 15 years and keyed a $6 million gift from the Bill & Melinda Gates Foundation to pay for design and engineering.

Then came when what was viewed as a "tipping point" matching pledge of $20 million, half from the Arakawa Foundation, announced in the fall of 2016 at a festive gathering of supporters at the Hyatt Regency Bellevue, next to the Tateuchi site.
The $10 million pledged by Yoko and Minoru Arakawa, to name the 2,000-seat centerpiece of the center the Arakawa Concert Hall, put the facility $122 million in cash and pledges on the way to the groundbreaking.

There's little doubt that Freeman and his wife, Betty, have been a key driving force in the growth of the central vision toward reality, although, without those who caught the vision, it would not likely have overcome the obstacles to reach the fundraising and groundbreaking stage it has.

Freeman, who with his wife will have provided more than 10 percent of the nearly $200m total when the campaign ends, likes to point out that "this project has raised more money than either of the other key performing arts centers in the region," referring to 2,900 seat McCaw Hall and the 2,500-seat Benaroya Hall.

The fact that Tateuchi represents a new performing-arts paradigm for this region is pointed up by Freeman's explaining in an interview the Center "will have more days of the year that it will be used, meaning it will be less dependent on annual fundraising to keep it open.

He also notes the acoustical versatility the center will enjoy. "We will be able to electronically tune the acoustics to fit the sound capability needed for the performing activity, whether a symphony or Broadway show."
Tweet

Tags:
Mike Flynn Economic Development people issues
Evans' selection as GOP keynoter thrust him into t...
Spellman was a governor willing to deny even the p...