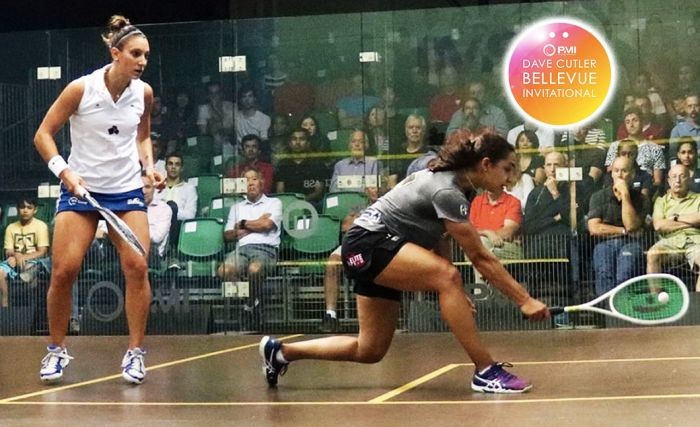 As Mariner, Seahawk and Sounder fans pour into Seattle's major sports stadiums cheering their teams on to achieve national pre-eminence this year, a sports event of world prominence is taking place this week, attracting only minor attention, at the Boys & Girls Club facility in Bellevue's Hidden Valley.

Shabana KhanIt's the PMI Dave Cutler Bellevue Invitational squash tournament, a round-robin event in which five men and five women, all among the world's best squash pros, are competing over the five days in an event that is world class in several ways, making the lack of visibility in its hometown disheartening.The event has not only attracted the world's top talent but is the latest effort by Shabana Khan, one-time national women's squash champion and a member of one the best-known squash families on the planet, to develop the corporate and sponsor support needed for her squash initiatives.  An example of the competitive value of her event and the lost fan opportunity that lack of visibility brings has been the performance of Reeham Sedky, a college student from Bellevue heading back this weekend to the University of Pennsylvania, for whom she won the national women's squash championship last spring.Shabana decided to include her in this event with the world's best because of the fact she is a Bellevue product and to everyone's surprise, Sedky won her Monday match, upsetting one of the world's best women.Through her non-profit YSK Events, Shabana has become perhaps the squash world's most successful female promoter of the sport and has brought significant attention for Bellevue with a sport that has been growing more rapidly in the U.S. in recent years than in any other country.  This week's event is appropriately named for the two men, both with worldwide reputations in their industries, who have stepped up financially since the Men's World Championships to help Khan fulfill her dream.One is Dave Cutler of Microsoft, universally acclaimed as the key technical brain behind the Microsoft Windows NT and all the subsequent windows versions. A decade ago he was recognized as a National Medal of Technology and Innovation laureate, perhaps the most prestigious honor in the country for developers of new technology.The other is Robert Harris, founder, and CEO of PMI-Worldwide, a Seattle-based brand and product-marketing company with offices in seven cities around the world whose corporate philanthropy has only recently begun to be recognized.But this is also an anniversary event in that Yusuf Khan 10-time all-India champion, emigrated to the U.S. in 1968 to teach tennis at the Seattle Tennis Club, bringing with him his family that then included children Asam and Shabana. Soon after arrival in Seattle, the elder Khan created the Seattle Athletic Club and made it a focal point for squash in Seattle.Then two of his daughters became among the best in the nation with Shabana's younger sister, Latasha, several s being national women's champion before losing the title to Shabana, providing me the opportunity to joke in an earlier column, "best in the family is best in the county."The Khan girls' older brother, Azam, also competed on the national squash circuit.I talked with both of Shabana's key supporters to get a sense of why they have remained so faithful to her cause.I asked Harris why he has been such a staunch supporter of Khan's, putting up $75,000 for this week's event, and he replied: "It's pretty simple. In a world beginning to look inward rather than building international alliances and global partnerships, I believe it's increasingly important to support sports that are global in nature and connect people from around the world. This is the only way humanity and our planet is going to survive and prosper."Cutler, a devoted fan of squash and the Khans, arrived in this area in the '80s, convinced by Steve Balmer himself to leave Digital Equipment Co., whose operating system he created, to join Microsoft where he guided development of Windows NT and every major version of Windows since 1993, and more recently developed Microsoft Azure.He regularly competed in squash tournaments before hanging up his racket in 2002 to focus his athletic activity on long-distance biking and is putting up $50,000 for this event as he has pretty routinely done for Shabana's events."She has some great ideas and a lot of those have been adopted by the national organization and players love to compete in her tournaments," Cutler said. "Not many people actually know what squash is, although it's a great sport for kids. And in recent years a lot of clubs have been converting racketball courts to squash courts.""I'd like to see other people step up to help her efforts, a lot of them for young people, become more successful," added Cutler. "I tried to convince Balmer to step up but he's not a racket person."It occurred to me after my conversation with Cutler that this search for support for Shabana's squash events isn't just about finding people who understand squash, it's about those who understand this s about supporting the internationalization of not just the Eastside but the entire region.The numerous events she has put on in Bellevue, beginning with the Men's World Squash Championships in 2015 at Meydenbauer Center for the first time ever in the United States, have been aimed at bringing attention to squash, but with a focus on making squash attractive to young people.When she put on the Men's World Squash Championship in late 2015, first time ever for the event on U.S. soil, Shabana charted new territory for prize money, which totaled $325,000 for the event that was held at Bellevue's Meydenbauer Center. That amount became the threshold going forward with the U.S. Open in Philadelphia the next fall boasting a $350,000 purse.Completion of this week's event clears the way for Shabana Khan's preparation for her launch in the fall of 2019 of West Coast Squash, by which she hopes to bring stronger and more convenient focus on youth squash in an array of cities around the West where parents and coaches have endorsed her initiative.