As Israel celebrates its 70th birthday, it would be appropriate if some note were made of the role played by Hank Greenspun, the Jewish Las Vegas newspaper publisher who risked going to prison to secretly ship arms to the Hagana during Israel's war for independence.Greenspun executed a daring gun-smuggling operation in 1947 that delivered surplus machine guns and airplane parts to Israel during its struggle, gaining praise from founding Prime Minister David Ben-Gurion for "extraordinary service" and later from Prime Minister Shimon Perez, who called Greenspun "a hero of our country." 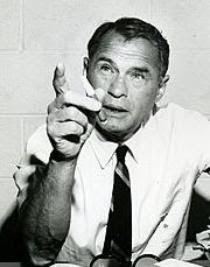 Hank GreenspunThe gun-smuggling incident was classic Greenspun, related during a later interview when he talked about convincing a reluctant Mexican shipowner to get the vessel, which had been filled with the weapons, on its way by holding a gun under his nose and saying "I'll count to five." He was convicted in 1950 and fined $10,000, the decision of a federal judge who decided on a fine instead of imprisonment.It was in 1950 that he bought a struggling union newspaper launched by striking employees of the Las Vegas Review-Journal and renamed it the Las Vegas Sun where, as editor and publisher for almost 40 years, he was just as likely to make news as to cover it. From battling the mafia with front-page stories to shouting down Sen. Joseph McCarthy to his friendship with Howard Hughes, he was often (as he said of himself) "crossing the line between newsman and newsmaker."I write now of Greenspun, a one-time client from my time as an executive with UPI, because in anticipation of Israel's anniversary, I recently reviewed the movie of his life, Where I Stand: The Hank Greenspun Story.Although Hank's story is laid out in a compelling 90-minute documentary narrated by Anthony Hopkins and produced, written and directed by Scott Goldstein, a two-time Emmy award-winning producer, who told me in a phone conversation this week: "This is the best thing I ever did in my life," it hasn't found a film distributor.When I asked Hank's son, Brian, a few days ago if there was any effort still going on to achieve broad visibility for the documentary, he said: "None that I know of though I believe Hank's story would make sense on Amazon or    Netflix."When I mentioned at the beginning of this Harp about some appropriate note being made of Greenspun's contributions to Israel's independence quest, it occurred to me that some able investor might wish to step forward to make sure Greenspun's story is finally widely told.The name of the movie came from the name of Greenspun's column that ran on the front page of the Sun almost every day from his launch of the newspaper in May of 1950 until his death in July of 1989.The movie, including many clips of interviews with Greenspun before his death, was paid for by Greenspun's children, including Brian, now editor and publisher of the Las Vegas Sun, with the intent to get it into general distribution.Goldstein came by the opportunity to do the documentary almost by accident as the Greenspun family was directed to him by a mutual contact.Goldstein admits to having been "apprehensive" at first because "I'd never heard of him and I didn't want to just get paid to make the world's most expensive home movie (the budget was just under $1 million)."But Goldstein says he was "shocked that I got no notes or directions nor any kind of interference" from Greenspun's children or his wife, Barbara, who took over as publisher of the Sun after Hank's death and died in 2010, a year or so after the documentary was finished. "They truly just wanted my best work."For those who see the movie, as I was fortunate to do in Seattle when it was featured at the Jewish Film Festival and promoted with the help of the Washington News Council, it's difficult not to catch the same fire Goldstein evidences for someone like Greenspun at a time when heroes are in short supply.Greenspun, a New York-educated lawyer who was a decorated World War II combat officer, got his first taste of Las Vegas as a publicist for mobster Bugsy Siegel's Flamingo Hotel and went on to be a pioneer real estate investor and developer with a vision of what Vegas could be, then a crusading newspaper publisher.

A unique aspect of the documentary is the many look-back stories told by Greenspun himself in later-in-life interviews, some obviously in anticipation of a future documentary.

Brian GreenspunThe weapons-smuggling event was one of many related in the documentary. Another was when a hit man hired by Vegas mobsters irate over Greenspun's harassment of them in his newspaper showed up at his home one evening and advised Greenspun, after Brian was told to go upstairs, that he was there to kill him.Brian, who only went halfway upstairs and listened in, related on camera that his father talked the hitman out of shooting him in front of his family but rather meeting him the next morning to do it, then "taking care of it" before the meeting could occur.Hank described Joe McCarthy, at a time when many still feared the senator's wrath, as "a red. White and blue-clad smokescreen to trample the rights of our citizens," as he shouted McCarthy down when he appeared for a rally in Las Vegas.There is some indication that that encounter opened the door to Edward R. Murrow's documentary that brought McCarthy down, with Murrow supposedly saying to his crew, "if some newspaper guy in Nevada can put him down, we need to do this."Reflecting on his father's life in an email to me, Brian said: "Hank Greenspun represented a generation of Americans who knew right from wrong in an instant and spent a lifetime acting on that belief. While he was extraordinary at so many levels, in the end, he was just an individual trying to do his best to make this world a little better place than he found it . Today's world needs a whole lot of Hank Greenspuns."