Friday's 242nd birthday of the United States Marine Corps will be a time for many of those who are or were Marines to focus on their time in "The Corps." And one of those is Maple Valley Attorney Dan Nielsen, who helped create an event called Always Brothers 100 Mile Memorial Run to raise money for families of Marines killed in Iraq or Afghanistan.Nielsen, a founder, and treasurer of the board of the event recalled in an interview how he and 12 fellow Marines who had all served on Presidential Guard Duty in the mid-'90s teamed in 2011 to honor the memory of one of their own by establishing the 100-mile run.

Dan NielsenNielsen remembered that Always Brothers began its signature 100-mile honor run in August of 2011 for Capt. Tyler Swisher, a Marine Corps brother who lost his life in October 2005 and who had served on Presidential Guard duty with the Always Brothers founders and board members. Swisher was killed by a roadside bomb while serving in Iraq in 2005.That first run, called "100 Miles for Swisher," began at Camp David with a goal of finishing at Swisher's grave at Arlington. But Nielsen remembers that "we needed to run a couple of times around the national mall to be sure we actually did 100 miles and when we did the mall, a couple Marines who were then on Presidential Guard ran along with us."The 100-mile run over the next four years became an annual event, in different locations,to honor fallen Marines and Navy Corpsmen who lost their lives in Iraq and Afghanistan by raising money for the education of their children.  Two of the runs have been in Ohio. The first was to raise money families of Lima Company, 22 of whose Marines and one Navy corpsman were killed in Iraq in 2005 when the vehicle in which they were riding was blown up.Seattle was the location for runs in 2013 and 2014 with the second done in conjunction with Marine Week.  The beneficiaries were six children who lost a parent in In Iraq and Afghanistan from areas where our board members are from.Circumstances interrupted the run after 2015, though Nielsen promised it will resume in 2018 "somewhere, maybe Seattle, or California." I met Nielsen last month when we happened to sit next to each other at the annual Marine Corps Scholarship Foundation (MCSF) dinner, an event held in various states to raise money for scholarships for children of U.S. Marines. It was being held in Seattle for the fourth time. We were both there as one-time Marines, supporting the event chaired this year by retired Marine major general Tracy Garrett.

Ret. Maj. Gen. Tracy GarrettThe Always Brothers board made the MCSF the beneficiary of their 100-mile event fundraising in 2015 when they established an endowed scholarship in Tyler Swisher's name.Reflecting on the success of the 2017 dinner, retired general Garrett said the event raised about $477,000 for the national fund.

"We have raised more than $2 million since the start of the Seattle dinner," she said. "There are so many good causes to support. We are thankful that Northwesterners are choosing MCSF as a way to recognize the sacrifices made by Marines and their families in the 16 long years that we have been at war in Iraq and Afghanistan."

Nielsen chuckled during our interview, following the MCSF dinner, as he reflected on the first 100-mile run, telling me he wasn't a runner then or now, though he stays fit (he's now 44) with some weight lifting. So he had some physical challenges getting ready for the first event. He says he actually completed 85 miles, with some rest stops along the way.

Offering a lesson in how an ordinary guy prepares for a 100-mile run, Nielsen, who grew up in Yakima, said "at first, you do a lot of running, like five to seven miles some days, sometimes 20 miles on a Saturday with the important focus on building back, core and leg strength."

"It took about 27 hours and I stopped at 50 miles to change socks," he said. "at about mile 60 I ate a hamburger and got the shakes so had I had to stop for several hours."

"One of the neat things is this is not a race," Nielsen emphasized. "We start together and end together. We have guys like me that are not really runners while some guys are really good, guys who find it just as hard to slow down as it is for us to try to speed up." 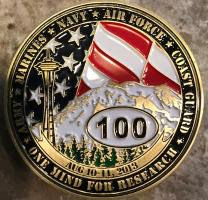 2014 Seattle run coinAn unusual aspect of the run is that a coin, slightly larger and thicker than a silver dollar, was created in 2013 for the Seattle run. It was intended, as Nielsen put it, "as a constant tribute to the reason why we are doing what we do with the one side showing honor to Tyler and pointing out where we served together -Marine Barracks 8th and I, WHCA (White House communications agency) and Camp David. The opposite side symbolizes the purpose and location of each run."

"We usually have 300 coins made each year and we give them to runners, supporters, and the people we meet along the way who inspire us or who we've inspired," Nielsen said.
Tweet