When the Seattle Mariners take the field for their home opener on April 15, some will recall the season 30 years ago that took two opening days three months apart to confirm that the future of the Mariners would be in Seattle, with a team of local owners, buttressed by a Japanese businessman devoted to Seattle, thus ending the uncertainty of the franchise.

This year's home opener against Houston will mark another anniversary of national importance. It was on April 15, 75 years ago that Jackie Robinson broke the color barrier with the old Brooklyn Dodgers so 2022 Opening Day will also be Jackie Robinson Day, leading to a weekend of activities in which the Mariners will help celebrate that anniversary.

It's on occasions like a three-decade anniversary of local ownership when those involved find that little-known facts of the story come to the forefront of memory for sharing.

Chuck Armstrong
was Mariner president for George Argyros - 22 yrs for the local ownership groupThus this Harp, a revisit to one I did five years ago, will be dedicated to a collection of several such stories related to that Mariners' accomplishment that made opening day 1992 special for not just the 56,000 fans on hand but also for supporters across the region.

It was in December of 1991 that U.S. Sen. Slade Gorton learned that his effort to convince Nintendo CEO Hiroshi Yamauchi to invest, not as a baseball fan but to repay the community that he felt had helped his company become successful, had paid off.

And it was on January 23 of 1992 when the announcement of the group of local investors to be named the Baseball Club of Seattle and led by the Japanese billionaire would buy the team to keep it in Seattle.

But it would be three months beyond opening day in 1992 before The MLB ownership committee recommended approval of the purchase of the team by the Baseball Club of Seattle. So while there was more optimism that April about the franchise staying here, the approval issue still had people holding their collective breath.

There was an appropriate major celebration at Safeco Field later to recognize Gorton for his essential role in finding local buyers after then-owner Jeff Smulyan announced he was planning to sell the team, triggering a clause that gave 120 days to find local owners.

The 120-day clause provides interesting memories for those most closely involved, and retired Mariners president Chuck Armstrong shared a couple of those memories in a telephone conversation.

The 120-day provision had been inserted in 1985 when Argyros and King County Executive Randy Revelle were negotiating a change in the Kingdome lease and Argyros suggested it as a "closer" to getting county council approval.

Armstrong recalls that the reason for suggesting the provision was that Argyros "didn't want to go down in history as the guy who sold to a distant owner and thus let the Mariners leave town without providing time to find local owners."

"He was okay with a new owner living elsewhere, as long as he didn't move the team," he added.

Armstrong recalls "George never gets credit for this."

But Argyros did become basically loathed in Seattle in 1987 when he sought to buy the San Diego Padres to have a team closer to his Southern California home after the death of owner Ray Kroc. Armstrong said the possible Padres purchase was suggested by Baseball Commissioner Peter Ueberroth's, who said he would find someone to buy the Mariners.

Armstrong was also involved in trying to help sell the Japanese ownership to MLB, remembering that he called his friend, George W.Bush, then managing partner of the Texas Rangers explained the challenge and asked if his father, President Bush, might be interested in helping with the issue.

"One day the phone rang and a woman said: 'the president is calling.' I asked 'President of what?' and she said a little icily, how about President of the United States.'"

Armstrong said it turned out that Baseball Commissioner Faye Vincent had worked for the elder Bush in the oil fields and they had remained friends. 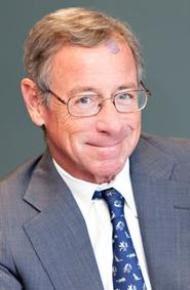 Arthur Harrigan's
legal maneuverings opened the door for local owners to buy the Mariners at a 'local price' millions below the actual value"I can't honestly tell you what, if any, role the president took in our issue, though both Bushes indicated they had no problem with a Japanese owner" chuckled Armstrong, who, since no one in the new local ownership, knew anything about running a baseball team, was brought back as president on July 1, 1992. He retired in 2014.

Another recollection, truly little known, except for those closely involved with the effort to save the Mariners, is of the legal battle in which Seattle attorney Arthur Harrigan won the right for local ownership to be sought.

That occurred because there was another aspect to that 120-day provision that Argyros provided and it was an attendance provision, a provision that basically provided that if Seattle fans didn’t want to support their team, there would be no requirement to search for local ownership.

Thus came a crucial role for Harrigan, whose firm of Calfo Harrigan Leyh and Eakes got into the battle because it represented King County and Smulyan was seeking to abandon the county-owned Kingdome.

The venue for resolving the future of the Seattle Mariners franchise was what amounted to an arbitration hearing before Arthur Andersen, the national accounting firm agreed to by both sides to decide some key issues relating to the lease and the team.

Since it wasn't a court process, which would have gotten large visibility for the battle between attorneys, Harrigan's maneuvering over the meaning of wording in Smulyan's contract regarding the attendance provision and whether it triggered the 120-day clause got virtually no visibility and was thus little known except to those involved, but I had fun telling the story in my 2017 column.

Harrigan's argued interpretation of the lease-requirement wording was accepted by the Andersen firm, so Smulyan was required to give the four-month opportunity for a local buyer to be sought. Then of perhaps equal importance, Harrigan successfully argued that there should be a local value lower than the open-market value.

The accounting firm agreed and set a "stay-in-Seattle" valuation at $100 million, rather than the national open-market value of $130 million that it had determined.

That created the opportunity for Gorton and others to lead the effort to keep the team in Seattle to find a local buyer for $100 million, rather than $130 million, within four months. And that led to Nintendo.

Ellis was picked to lead the group's effort to gain baseball's approval, becoming managing general partner, eventually becoming CEO and guiding the team through the rest of the '90s, and setting the stage for the team's 2001 MLB record-tying 116 victories.

John StantonOne of the most interesting stories and one that I've felt should be shared ever since I first heard it, is how now CEO and majority owner John Stanton had wished with all his might to be part of the ownership team in 1992 but told me some years ago "I didn't have the money."
For those who might find that startling or amusing, remember that wireless pioneer Stanton had then recently departed McCaw Cellular with Craig McCaw's blessing to launch Stanton Communications with his wife, Theresa Gillespie, and they had sunk all their capital into that venture. The company would, in 1994, become Western Wireless, which went public in1996 and spun off VoiceStream Wireless in 1999.

"We had the opportunity to invest in 1992 and passed because we were funding payroll for about 100 employees out of our personal checking account," Stanton told me in an email.

"In 2000 we had the opportunity to buy John McCaw's interest in the team. And we have been involved since then."

I asked Stanton for this column to share with me his feeling about baseball and his answer provided the perfect close:

‘I am first and foremost a fan; I love the game and everything about it; Opening Day reminds me of every Pilots and minor league game I attended with my father (he passed before opening day in 1978) and every game I have attended with my wife and sons. To quote a line from James Earl Jones in Field of Dreams 'This field, this game -- it's a part of our past. It reminds us of all that once was good, and it could be again.'"

More posts from author
Tuesday, 06 December 2022 Alaska Airlines' 15th Fantasy Flight Saturday from Spokane to Santa 'Displays basic goodness of people'
Monday, 05 December 2022 Three 'women of influence' in Cle Elum could compete with any for their focus on the region, and the planet
Monday, 21 November 2022 CougsFirst! Focus on 'Cougs doing business with Cougs' sets WSU community apart from others