As the Husky Nation pays COVID-subdued respects to the stadium where 100 years of the best of University of Washington football teams and players have been on display, reminiscing will turn to a discussion of who were those best over 10 decades. And that may be particularly true in this strangest of football seasons when looking back may ease the pain of looking at now.

That’s when someone will mention George Wilson, the first Husky All-American, perhaps the greatest UW football star ever, and a player who actually had a professional football league named for him. What is now Husky Stadium, officially Alaska Airlines Field at Husky Stadium was only a couple of years old when Wilson arrived as a hot-shot kid from Everett. 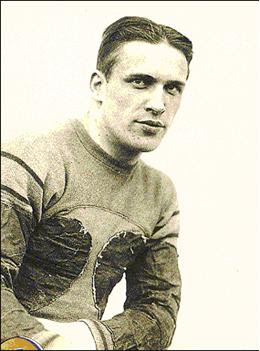 George WilsonWilson, nicknamed "Wildcat," had already fashioned a name for himself nationally as a high school player who guided his Everett High School team to what was acknowledged to be the nation's best high school football team two years in a row, before arriving on the UW campus.

I was moved to recall Wilson in a column six years ago when his career record of 38 touchdowns, which stood for more than 90 years, was tied by Bishop Stankey.

And so for memory’s sake, I am replaying that 2014 column in this Harp.

The deeds of George Wilson, who was UW's first nationally recognized football star for his career from 1923-25 that included leading the Huskies to their first two Rose Bowl appearances, are shrouded in gridiron antiquity for most fans, who view the deeds of stars of their great-grandfathers' or even grandfathers' era with disinterest.

Those who take the time to delve into history are left to ponder Wilson's story, which epitomizes the fleetingness of fame and the fickleness of fate, as for a mere half a decade his star shone brightly on the national football stage, first as a collegian then as a highly publicized pro football player before he faded into obscurity.

Unlike some of his high-visibility football peers who managed to parlay fame into later successful careers, his post-football “success” was parlaying his name to do some professional wrestling for a few years. He worked in the Texas oil fields, then home to Everett as a dock worker then as a longshoreman in San Francisco, dying on the dock there of a heart attack in 1963.

But in an example of the often strange links in the chain of fortune forged by fate, Wilson, at the highly publicized outset of his pro football career, set the stage for a little-noted player from Gonzaga College named Ray Flaherty to launch a professional career in which he went on to become one of the most successful coaches in the history of the NFL.

Although the Huskies prior to Wilson's arrival had some noteworthy accomplishments, including the record of Gil Dobie, whose pre-World War I teams posted a remarkable 58-0-3 record, performances in those early days in the West got little national visibility.

Wilson, however, brought national recognition to the Huskies. In addition to guiding UW to those first two Rose Bowl appearances, he was a first-team All-America selection in his senior year in an all-star backfield that might vie for the best ever, a backfield that included "Red" Grange, the "Galloping Ghost" from Illinois, and Stanford's Ernie Nevers, plus Wilson.

Upon his graduation in 1926, Wilson was enticed to join the just-forming American Football League (not the AFL of later decades) by the league's co-founder, who had already lured Grange to join the league as his partner but wanted a name player to compete with Grange on the field.

Wilson was named president of the league's traveling team, the Los Angeles Wildcats. The league actually paid the bills and filed the franchise ownership papers for the team known as "Wilson's Western Wildcats," actually based in Chicago because of the travel difficulty of being based in Los Angeles in those days.

Grange's traveling all-stars and Wilson's Wildcats actually met on the field once that season, in Los Angeles before a crowd of 70,000. While Grange's squad, which later became the Chicago Bears, won the game, 17-7, Wilson outgained Grange, rushing for 128 yards to 30 for grange.

Wilson stocked his team with players from the West, including two from Gonzaga College in Spokane. In addition to Flaherty, an end, he tapped Matty Bross, a halfback, to be part of the western stars' team.

Ironically, as Wilson's star would quickly fade, Flaherty, who hadn't gained much attention as a collegian at a small school removed from high-visibility opportunities, went on to make pro football his career. After his brief stint with the Wildcats, he moved to the New York Giants, where he was an all-star end, then became head coach of the Washington Redskins, where his four trips to the NFL title game and two championships earned him acknowledgment as one of the NFL's all-time best coaches.

Choosing Flaherty for his Wildcats and thus earning credit for setting the stage for what followed is a contribution not mentioned in the sports history books, and perhaps not other than this column.

The AFL didn't last and Wilson joined the Providence Steam Rollers of the NFL, where he played for three seasons, including 1928 when Providence won the NFL championship and Wilson scored five touchdowns and had four interceptions to lead the team to the title.

There is still another irony, or perhaps a small-world aspect, to Wilson's story. It's that another Gonzaga College player, Houston Stockton, was guiding the Frankfort Yellowjackets (later the Philadelphia Eagles) to the NFL title in 1926 while Wilson's Wildcats were gaining attention.

Stockton's statistics as a collegian were almost as impressive as Wilson's, including a 77-0 Gonzaga victory over Wyoming in which Stockton scored six touchdowns and kicked 10 extra points.

In that era when players played both offense and defense, both Wilson and Stockton were viewed as stars on defense as well as offense and were regarded as punishing tacklers.

But Stockton's exploits got scant attention, being played out at a little school in out-of-the-way Spokane. His national recognition was limited to twice being named an honorable mention All-America.

Stockton, the grandfather of NBA Hall-of-Famer John Stockton, had joined the Steamrollers and was a teammate of Wilson's for the 1929 season before he returned home to Spokane to go into business and Wilson left football to begin his decline from fame and attention.

He spent a few years as a professional wrestler, living off the last of his football prominence, then worked in the Texas oil fields, then back to working in the shipyards in Everett then as a longshoreman in San Francisco, where he had a heart attack and died alone on a dock in 1963.

Wilson's years far away from the limelight were interrupted only twice for reminders of what had been, once when he was inducted into the football Hall of Fame and in 1959 when he was invited home to UW, by Post-Intelligencer Sports Editor Royal Brougham, to be honored prior to the Huskies Rose Bowl victory over Wisconsin.
Tweet
Tags:
Mike Flynn
Lengthy effort to get documents in jobless-payment...
BYU star quarterback Zach Wilson's family as impor...