When I have occasion to mention to friends or associates that my first boss, and journalistic mentor, was a woman, there's often a doubletake because of their quick awareness that I'm referring back to the early '60s, a long-ago time when many assume that women were unlikely to be the boss. 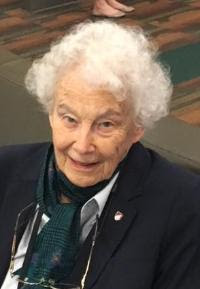 Roberta (Bobbie) UlrichRoberta (Bobbie) Ulrich was the manager of the Spokane bureau for United Press International when I went to work for her in 1961 while still a student at Gonzaga University. Although she was only 32 at the time, she had already acquired a level of respect from the then-exclusively male-reporter "club" against whom she competed on behalf of a wire service whose mantra was getting it first but get it right. She made a point of doing both.But she fulfilled the mentor role of building journalistic skills in a nurturing way that it only occurred to me much later was significantly successful in part because she was a mom, raising two sons while missing few beats guiding UPI's news coverage in Eastern Washington and Northern Idaho. I long ago decided that the skills of mentoring are simply different when they are employed by a mom.Bobbie and I had a chance to spend parts of two days together this week as we reconnected at her alma mater, Washington State University, where she was being honored by the Edward R. Murrow College of Communications with a Hall of Achievement Award for her the journalistic contributions.Her award came as part of the 10th Anniversary of the Hall of Achievement Ceremony, part of the Murrow Symposium where a key feature is the annual lifetime achievement award to nationally prominent communications figures. That award went this year to Robert Siegel, the NPR reporter who retired in January from his 31-year role as host of the public radio network's highly regarded All Things Considered.I've told friends and acquaintances that Bobbie was largely responsible for the key steps on my career path, at least the UPI half. After her four years of training and mentoring in Spokane, I graduated from Gonzaga and was sent by UPI to Olympia where I soon became state political editor, then to the Pacific Northwest and Southern California as UPI executive overseeing business in those regions.Eventually, I was named the wire service's San Francisco-based executive responsible for business activities in the Pacific Coast region. I cherished the congratulatory notes I got from her, via inter-office teletype read by all, with each promotion.Murrow, of course, was the legendary television journalist who graduated from what was then Washington State College and went on to become the most recognized TV reporter of his era. The symposium named for him dates back to 1973 when WSU began an association with Murrow that led to the most prestigious annual communications-industry event in the Northwest, one that involves the annual honoring of a national media figure and selection of prominent communications grads of the university.Honored with Hall of Achievement recognition with Bobbie were longtime KOMO-TV, Seattle, reporter and anchor Bill Brubaker and Lorie Dankers, who began her career in the other Washington to be a field producer at Newslink, then moved to the U.S. Senate staff before becoming a public affairs manager for a nine-state region for TSA Brubaker, incidentally, in his remarks as he received the award, credited Bobbie as one of the three people who helped shape his career.The industry lost two of the Murrow College's Hall of Achievement alums this year with the deaths of iconic television sports reporter Keith Jackson and Jay Rockey, whose career in public relations in Seattle brought him regard throughout his industry in this region and beyond, as well as among top executives who sought his counsel.

I got to tell stories about Bobbie to those attending the two-day symposium and the various receptions because I believed those on hand to honor her ought to have a real sense of the person they were honoring.It was shared from the podium that Bobbie covered college football games at a time sports writers were reluctant to have a woman in the press box.But she shared with me that, as she put it, "much of the effort being made at that time to get women into press boxes was to make a point. But I never needed to make a point, it was just part of the work I was doing. It was just my job."And I told several times, too much collective laughter, a press box story that no one but Bobbie knew before this week, a story she told me soon after the incident occurred more than 50 years ago.It relates to the Cougars' home opener for the 1962 football season when, having three weeks earlier ordered a telephone installed in the press box, she arrived an hour before kickoff the find no phone had been installed thus her ongoing communication with the UPI staff members during the game would not be possible.So she picked up another reporter's phone and dialed the home number of the president of General Telephone, the provider of phone service to much of the area. The president answered and heard Bobbie say: "Hi, Al, this is Bobbie Ulrich," to which he replied, "well hello Bobbie, How are you.""Not too happy right now. I just got to the Cougar press box and I don't find the phone I ordered in three weeks ago. It's only an hour 'til game time but I know you will have the phone here by then."She hung up, and the phone installer showed up and completed the installation with minutes to spare before kickoff.Bobbie never sought nor showed deference to either the male reporters she dealt with and competed against, or the business leaders she came in contact with, though most of the men in both groups came to evidence a healthy respect for Bobbie because of the manner in which she competed as a journalist.Bobbie's sense of humor was evident when she was asked if she remembered any problems she had had as a female journalist and the occasion she remembered to share was when, as a young reporter she went to the morgue with other reporters as the coroner explained details of a crime victim. The coroner, as he prepared to remove the sheet from the male victim's body, said: "Do you wish to leave, Bobbie?" To which she recalls responding, "is this meeting public? If so I'll stay."