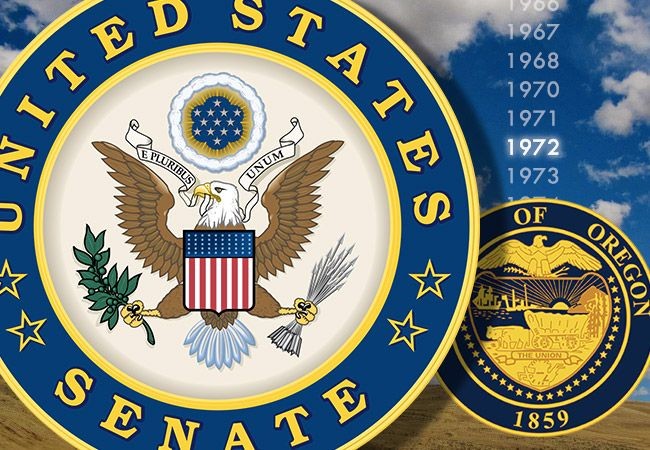 It was 50 years ago that James Elias, then a local Portland area telephone company manager, suddenly became a political giant killer when he agreed to run the U.S. Senate campaign of a popular Republican legislator and proceeded to guide the defeat of an Oregon icon known as "the tiger of the Senate."

Elias was a 33-year-old Portland district manager for the old Pacific Northwest Bell (PNB) when Robert Packwood, who had been a force in the Oregon legislature since his election in 1962, asked Elias to manage his 1968 campaign, an unlikely quest to topple one of the most respected men in the Senate, Wayne Morse.
Before continuing with the Packwood story, It's important to note the second chapter of this column is the gubernatorial campaign in Washington State four years later when Elias guided the precedent-setting re-election of Republican Dan Evans to a third term.
Ironically, both Evans' opponent in the third-term bid, former Gov. Albert D. Rosellini, and Packwood as a prominent Oregon legislator had served as consultants for Elias in speaking to PNB managers and doing some training about political issues in the two states.
But back to Packwood, whom Elias recalls wasn't even mentioned by name at first in the state's major newspaper, The Oregonian, which merely referred to him as "Morse foe."
After all, Morse was one of only two Senators who voted against the Gulf of Tonkin resolution that basically gave President Lyndon Johnson carte blanche to pursue the Vietnam War any way he wished, without again having to ask Congress. And Morse had remained one of the Senate's most vocal critics of the war.
But he had made enemies over time because of his switch of parties from Democrat, as which he was originally elected, to Independent, for which he proudly claimed for himself the role of the Senate's one-man Independent Party, and eventually to Democrat.
And in facing Packwood, he had an opponent of broad appeal. As Elias recalled: "We had thousands of young people all across the state working for what they viewed as a different sort of candidate, liberal on social and women's issues, although fiscally conservative."
"We put out position papers on any issues anyone could care about, dozens of them," Elias said. "After a while, people couldn't believe anyone was on top of so many issues."
"In the end, The Oregonian did an editorial page column saying, basically, that Packwood seemed to be 'more knowledgeable on more issues than we've ever seen,'" and they began calling him by name. Packwood kept climbing in the polls and eventually won.
Elias recalls that after Packwood's election, the new Senator wanted him to come to Washington as his administrative assistant and when he learned Elias had no interest in going to Washington, D.C., "Packwood wouldn't talk to me for six months."
Taking on the Evans third term campaign brought about one of the all-time strangest political stories when Elias hired a young Ted Bundy, who would later be found to be a serial rapist and killer of young women but was then an intelligent and personable political science student.
"I always hired 'spooks' to hang out with the competing campaign," Elias explained. "They'd pick up things the candidate said more candidly with those close to him, then I could use that information to frame questions comparing private comments with what they were saying in public."
"So Bundy was our 'spook' in the '72 campaign. He was a smart kid and I sent him to hang out in Rosellini's campaign and Al got accustomed to talking with Ted and eventually had Bundy ride along with him and talk," Elias said with a chuckle.
Elias' wife, Ann, a partner in any campaign he was involved with, did the polling research and determined that Rosellini was ahead in the polls and continued so until the two candidates debated.
"As the debate ended, the floor was opened for questions and answers and I had our people, with their prepared questions, hurry to the mike and they were the first dozen people to ask questions," Elias said. "One of them was Bundy and when Rosellini realized the kid he had trusted was actually in the Evans camp, he could only stammer and his jaw clicked in the classic 'Rosellini is upset' reaction."
It was then that Rosellini mouthed his "Danny Boy" reaction to Evans that observers said turned the campaign. Ann's polling showed that Evans climbed from that time on and he won a third term.

Jim and Ann Elias were stunned, as were all those who knew Bundy, when he was jailed three years later in Utah as his string of murders of young women began to unfold.
Elias shared that Ann, his wife of 52 years, played key roles in both the Packwood and Evans campaigns.
"For Packwood, Ann managed all of the county chairmen statewide as well as all who volunteered to work in the headquarters," he said. "After Packwood was elected, he got her appointed to manage the largest 1960 census district in the country."
"For Evans' campaign, Ann was responsible for the polling. She drew the sample of voters to interview, constructed the questionnaires and supervised the people conducting the research," Elias said.

Packwood served four terms in the Senate and was always in the forefront of women's issues, including being an early and ardent advocate for abortion rights and a strong supporter of the Roe vs. Wade decision of 1973.

Thus it was a stunning fall from grace when the Washington Post, in 1992, published a series of articles chronicling accusations of sexual harassment against Packwood, who fought the charges. but more women came forward to make the same claims. After three years of controversy, the Senate Ethics Committee recommended his expulsion and Packwood resigned from the Senate on October 1, 1995.

Elias returned to his Northwest management role with the phone company, turning down opportunities to go to New York and Washington, D.C.,(again) but by the early '80s he became part of a new challenge, the breakup of AT&T and the spinoff of the local phone companies that became known as " Baby Bells."
He recalled skiing in Sun Valley when he was notified that "Mr. Smith (Andy Smith, PNB president) was sending a plane to pick him up to return to Seattle.
"Divestiture had been ordered by the Federal Court and Smith wanted Elias to handle the public relations challenge of convincing the public that "just because we were being spun out from AT&T didn't mean we were now adrift in relating to our customers."
But as AT&T sought ways to come back from the breakup, it apparently sought legislation in Congress that might have allowed it swallow its orphaned children.
Elias recalls going to Packwood to get him to kill the legislation, which he did, getting back to Elias with a comment he well remembers: "You just cut the heart out of AT&T."
Tweet