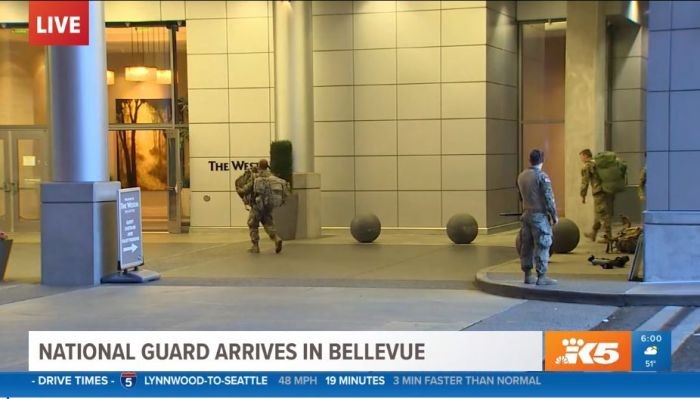 Police and elected officials in Seattle and Bellevue were prepared for a weekend of peaceful protests that had the laudable purpose of raising awareness about the "murder" of a black man by a white policeman in Minneapolis. But they were unprepared for the accompanying rioting and mayhem guided by what could come to be described as an American ISIS of white thugs, self-named Antifa, bent on revolution.

But the fact is the mayor and police chiefs in both cities were warned in advance that the creators of a strategy of destruction were coming in under the cover of the peaceful demonstrators.
In fact, one Antifa social-media message Sunday left the strong implication that the group had intended to take their destruction into suburban neighborhoods in Bellevue.
And now the officials in both cities will be pressed to explain to both business communities whose members will be assessing the extent of the damage, much of it dramatic, the inadequacy of police response but more importantly to create a strategy for the future.
Meanwhile, President Trump is, with apparent accuracy, blaming Antifa for much of the destruction in American cities across the country, while facing pushback from his opponents for his desire to officially declare them a terrorist group.
For those unaware, Antfa is described by the New York Times as being organized in "local autonomous cells around the country," adding that "though it is said to lack official leaders, it does have operatives who move across the country making mayhem."
And for those who might be tempted to pooh-pooh this information about Antifa leadership, here's a tweet that went out Sunday early afternoon:
"Alert. Tonight's the night comrades. Tonight we say 'f--- the city' and we move to the residential areas...the white hoods. And we take what's ours."
The tweet was retweeted 289 times and had 33 likes.

The Trump Justice Department has quickly branded Antifa a domestic terrorist group with a press release from Attorney General Bill Barr saying, "the violence instigated and carried out by Antifa and other similar groups in connection with the rioting is domestic terrorism and will be treated accordingly."
And Minnesota Gov. Tim Waltz, a Democrat, acknowledged Saturday at a press conference: "The situation in Minneapolis is no longer in any way about the murder of George Floyd. It is about attacking civil society, instilling fear, and disrupting our great cities."
ISIS is the powerful, best known terrorist militant group in the world so when Bellevue business leader Michael Nassirian, attached the ISIS name to the mayhem, he may have set an appropriate stage for future planning on preparing for demonstrations and accompanying unrest.
Nassirian, an Iranian who became a top Microsoft executive before retiring to become an investor and leader in the Bellevue business community, gained some recent attention in the battle to help bring the economy back from its impact by the coronavirus pandemic.
Nassirian contracted COVID-19 and was bedridden for almost a week and soon set about seeking to create an app to provide employers and employees and customers current information before they interact, a step to aide re-opening the economy. He has named it "My Immunity Pass."
There has been considerable criticism starting to occur about the inability of the police in either city to avert or diminish the extent of the damage given the fact they had advance information.
And maybe particularly toward Bellevue Police Chief Steve Mylett spending more than half an hour visiting with the legitimate demonstrators while the thugs wreaked havoc inside Bellevue Square.
Nassirian, after being among business leaders who toured Bellevue Square and the Bravern Monday morning to assess the extensive damage, was quick to point out the those bent on mayhem were "well organized, well-funded, and had a solid communications infrastructure."
"Now isn't the time to point fingers to find blame but rather to commit to come together as a community and prepare for any such thing in the future," Nassirian said.
And it could happen that as Trump seeks to put together a full-fledged Justice Department effort to go after Antifa as a terrorist organization and withstand pushback from the inevitable concerns about privacy invasions, being able to use Nassirian's American ISIS brand could be a major asset.

Because officials in cities across the country are likely to understand that Antifa is as it seems to be, this weekend rioting and destruction won't be its last appearance.
Tweet