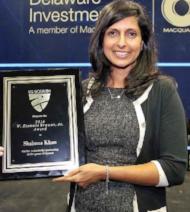 Shabana Khan, perhaps the most recognized women in the world in the fast-growing sport of squash, was honored last week in Philadelphia with the sport's most prestigious national award in recognition of her success in putting on the 2015 Men's World Squash Championship in Bellevue last November.

But despite her growing national, and international, recognition in bringing the world men's event to the this country for the first time, and for the series of squash events being scheduled in Bellevue over the next year, she is still struggling for recognition and support in the city she is seeking to turn into a global squash capital.

Khan, a lithe and athletic 48 year old who is former national women's squash champion and ranked among the world's best in her playing prime in the early 2000s, was honored in Philadelphia during the national squash championships with the 2016 W. Stewart Brauns, Jr. Award for major administrative contributions to the sport.
This season, under Khan's leadership working with PRO Squash Club in Bellevue, what the official publication of US squash describes as "an unprecedented skein of events" is planned for Bellevue, including four junior tournaments as well as a college showcase. To follow is a $200,000, sixteen-man pro tournament, described as "possibly the most lucrative event in tour history."

One of the prize events that will take place in Bellevue will be the first Bellevue Squash Classic in May, squash's equivalent of a PGA golf tour stop. The event, which will bring the world's best squash players to the Pacific Northwest, will showcase the four-wall glass court inside the Hidden Valley Boys and Girls Club, a location that Khan enthuses about.

When I first met and wrote about Khan a year ago, it was as she was struggling to make sure the men's event would come off as planned to fulfill her goals of providing Bellevue an opportunity to promote its role as host of a world-championship sports events, foster a sense of community involvement and support empowering a woman entrepreneur.

But as soon as Khan's challenges with dollars and event support came to light, developer Kemper Freeman provided her some financial support on the spot and Bellevue City Councilman Conrad Lee became her advocate in the quest to have the City of Bellevue participate. It was too late for that to happen, in part because it was too close to the time the world event was to take place.

But it's not too late for the city to get involved now for the coming year. That's something that would be a given in other communities that had the opportunity to have the brass ring as emerging center of what is becoming an increasingly popular sport in many places around the world.

As the men's world event quietly but successfully came about last fall, despite challenges with the Meydenbauer Center location, the leading world figures in squash, both players and presenters, began pressing Khan to create additional involvements. And those are coming to pass as she fulfills a request from Hong Kong to put on a squash event there, and in Los Angeles, where she will be guiding a major new event focused on young people.
In most places where it is played on a highly competitive level, squash is thriving. What was once known as a sport that was primarily for the wealthy could afford to is now more accessible to people of all income levels.

And with the growth of the sport and the accessibility to new squash players, the U.S., along with England and Egypt, are the three countries where the squash game is thriving most.

Khan founded YSK Events three years ago to bring the men's world event to the U.S. and has served as CEO since then as she and her brother Murad, as president, and sister Latasha as vice president for business development have turned it into what she hopes will be a full-service events company. Murad has played professional squash and it was Latasha who was national women's champion when Shabana defeated her to win the crown, providing me an opportunity to note in my column last year that "best in the family is best in the nation."

"Y" in YSK stands for both her 10-year-old daughter, Yasmine, who is always in her conversations, and her father, Yusuf, who was nine-time India champion when the Seattle Tennis Club hired him in 1968 to come to Seattle to be head tennis pro. Shabana was 2 ½ years old at the time. The "S" and "K" are for her initials.

It was her father who turned the Seattle area into a center for squash and it was he she partnered with to put on the Women's World Championship in 1999, the first time that event had ever been staged in the U.S.

"After hosting the Women's World Championships, I felt very confident in being able to bring the world's major squash event to this area," she told me, referring to last year's men's event.
"Additionally as a former player I wanted to take the sport to a new level and treat these amazing athletes how they truly should be treated," she said. "I had set out to create a new standard for the sport and expectation of the most prestigious event on the Professional tour."
But she noted that the most important consideration for getting the men's world event was that she wanted to thank her ailing father for his role in building the Seattle area into the center of squash in the Western U.S.
A laudable aspect of Khan's events is that they are focused on young people, from ages 11 to 19, giving them the opportunity to interact via Skype with the top squash pros in the world.
"In all the events, we offer free clinics for kids to work with the pros, who are amazing because they realize what we are trying to do and are working hard for them so they take the time with the young people," Khan said.
A key event will be the West Coast College showcase the second week of May, where high school squash players will be competing in what amounts to a recruiting show for college coaches, mostly from Ivy League schools but also a few western schools like Stanford.
Khan is looking for a major sponsor, as well as event sponsors, for her array of events since Wells Fargo, which had the $25,000 sponsorship and wound up with its name carried around the squash world as all the matches were streamed worldwide, has for various reasons not renewed.
"Bellevue is being recognized around the country and around the world so it seems fair to hope we begin getting some recognition in Bellevue," she said.
Tweet