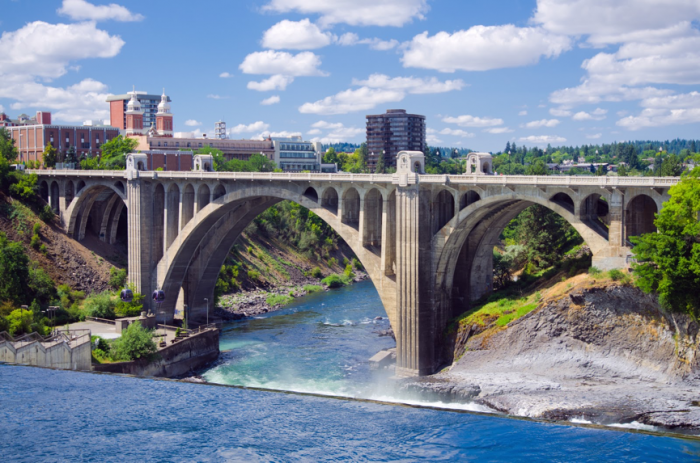 Some people are born into wealth and riches and others achieve them by ingenuity and hard work, often with a touch of luck thrown in. John Stone, who created a series of high-visibility businesses across the Northwest, might chuckle at the suggestion that he had it both ways.

He was born into the "wealth" of the St. Aloysius neighborhood in Spokane where the mom's kept track of all the kids and grabbed them by the collar if they were acting up and gave them a smile or hug when they did well. For those who went to St Aloysius Grade School, the Holy Names nuns knew well both the collar grab and the smile.

John StoneWhen my mom died in 2004, John sent me a note after sitting quietly in the back of the church for her service to tell me that she had been one of the "angel moms" who kept him from straying very far from the right path.

The "right path" took Stone, who turns 77 next month, on a path from Boeing computer systems to his own computer service firm, a multi-state mini-storage company, then in the early '90s, he entered the multifamily and senior housing segment of the real estate industry. Stone developed luxury apartment projects in San Diego, Seattle, and Portland, in addition to Spokane, then independent living assisted living and Alzheimer's facilities.

He was to be honored this week by the Spokane Journal of Business at its Icons event, the publication's annual celebration of Inland Northwest business pioneers and innovators. I was to introduce him at the luncheon event.

But like all events scheduled during this virus-impacted time, the event was canceled but the Journal of Business produced a special supplement on the Icons of 2020 in this week's issue.

When I asked publisher Paul Read about his sense of why Stone deserved the honor, he replied:

"John Stone's legacy as a business Icon in our region will be marked by his bold vision for what real estate development could and should look like, his willingness to take risks where others wouldn't, his courage and tenacity to speak his mind on civic issues, and his humble philanthropic spirit."

The first is Riverstone Development, which began in 1999 when Stone saw the opportunity to turn an old sawmill at the northwest edge of Coeur d'Alene into something special. He purchased the 155-acre site and turned it into a lifestyle center, a "town within a town" to provide its residents with restaurants and shops.

Stone purchased the property in 1999 and built his live, work, play concept in phases. It gained traction among retailers and residents, but as the Great Recession hit, tenants moved out, threatening the future of the Village at Riverstone.

A year later, with developer friends, he created Stone Rivard and McGonigle, Development, LLC, which has become one of the larger developers on the West Coast.


As the economy bounced back, so did Stone's determination to continue with his dream project. Tenants began signing leases again as Coeur d'Alene's population grew.

Now, the project is fully developed and recently celebrated its 20th anniversary. What was one a sawmill has become the gateway to Coeur d'Alene.

The second development, one that had an impact on the entire state, was negotiating the deal to build the new Google facility in Kirkland that paved the way for Google to begin bringing thousands of employees to this state in 2004.
Had the Icon event occurred this week and I had the chance to introduce Stone, I would have spent a bit of time sharing little-known details about him that provided evidence of the fact he completes what he sets his mind to.
That's a reference to Stone's decision to compete in Ironman triathlon events.
It was in the late 2000s that Stone explained to me that "I looked in the mirror and said 'you are getting to be a fat slob and you are going to run an ironman and have six months to get ready.'"
So six months later, at the age of 63, he competed in a half ironman in Carlsbad, CA, and a year later he ran a full ironman triathlon in Coeur d'Alene. Two years later, he did the Ironman Canada.

Throughout his career, Stone, who graduated from Gonzaga U in 1967, has remained closely tied to his alma mater as a member of the GU Board of Trustees and a member of the board of regents. Stone also was involved in the fundraising for the 6,000 seats McCarthey Center Basketball Arena on the Gonzaga campus.

He once shared with me that he got his first line of credit as a result of his GU ties. That was credit from Jack Stockton, co-owner of Jack and Dan's Tavern where the students and grads hung out. He took that early financial lesson far.
Tweet