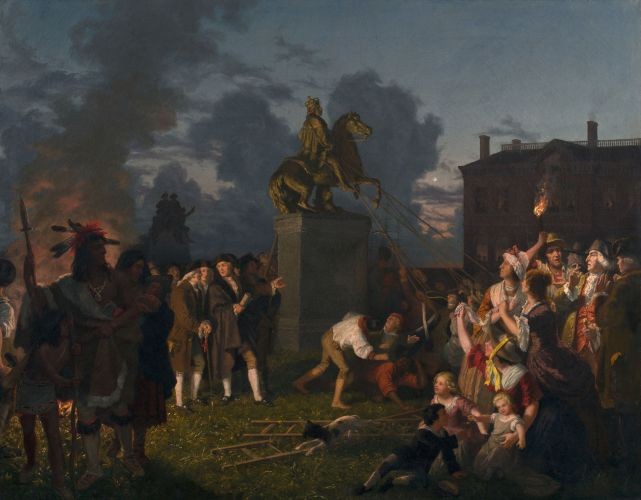 Nothing was more certain to frame the clash between the national reckoning with the evil of racism and a history bristling with racial ambiguity than the phenomenon of statue destruction that has come to mark the current wave of protests against racial injustice.

The destruction of statues has been the violent counterpoint to the mostly peaceful protests across the nation, but that violence has begun to stir some controversy, including those who think the actions have gone well beyond the acceptable.

What began as an effort to tear down statues erected to honor some of the best-known Confederate generals has moved on to target virtually any historical figure who owned slaves. In San Francisco's Golden Gate Park recently that statue destruction included ones to honor St. Junipero Serra, founder of the string of California missions, and Francis Scott Key, who wrote the Star-Spangled Banner. And likely surprising to many, the statue of Ulysses S. Grant, the commander of the army that defeated the Confederacy and who became president.

The pushback reactions included a tongue-in-cheek one from the small-town mayor in Ohio who announced the creation of a "statue sanctuary" city and offered his community as a place to which the felled statues, or those not yet toppled, could be shipped for protected display.

There was the Catholic Archbishop who, explaining "there was evil here," performed an exorcism at the site in the park where the statue of Junipero Serra had been torn down.

And significantly, there's the black mayor of San Francisco, London Breed, who scolded protestors who tore down statues while damaging Golden Gate Park, saying "when people take action in the name of my community, they should actually involve us. And when they vandalize our public parks, that's their agenda, not ours."

There were even some who suggested that statues of George Washington, who owned slaves, and Thomas Jefferson, who fathered children with one of his slaves, should be removed. Those suggestions helped fuel the controversy over the statues

One of the toppled monuments, a 10-ton cross erected in a Seattle cemetery 94 years ago to honor the memory of Confederate soldiers, prompted a call from my longtime friend, Gary Neeleman, author of perhaps the definitive work on one of the most racially ambiguous chapters of American history.

I'm referring to the story of the thousands of southerners who fled to Brazil to establish new lives after the fall of their beloved Confederacy and their refusal to again become citizens of the United States.

Neeleman's four decades of research on that bit of history included numerous trips to Brazil, both because of his ties to that nation and because of his fluency with the Portuguese language. He and his wife, Rose, became taken early in his professional career there with the 1866-67 emigration of the confederates, who quickly became known as the Confederados.

His book, Stars and Bars Under the Southern Cross, included dozens of interviews with descendants of the original 7,000 families who moved to Brazil at the invitation of Brazil's emperor, as well as newspaper clippings and letters shared by those descendants. In addition, the Neeleman's collected hundreds of photos.

The book was published in Portuguese by the most prominent university in Brazil but awaits a publisher to produce the book in English.

Long a little-known part of American history, the story has been gathering some attention, including a front-page piece in USA Today in 2015 on the 150th anniversary of the end of the Civil War and a recent documentary on the History Channel.

And those who relate the story with anything resembling sympathy or kind thoughts for those descendants of the Confederados, who gather annually for a celebration at the cemetery where many of the original Confederates and their descendants are buried, suffer some criticism.

Thus I'm sure it was for USA Today whose cover story included a photo of kids wearing baseball caps with the Confederate battle flag emblazoned on them.

I've done a couple of columns on Neeleman, a longtime colleague of mine from our United Press International days, on his three books on Brazil's history, including the one on the Confederates when it was published in 2015 in Portuguese, the language of Brazil.

I got some reader pushback over that column for the comment that the decades of research by Neeleman and his wife, Rose, through aged documents, old letters and newspaper clippings, and interviews with descendants had led him to conclude that history rather than racial hatred, and pride rather than prejudice, were the driving forces for those who moved to Brazil.

And likely even more pushback from any who will be offended by our conversation this week when he explained that his research and conversations with descendants made it clear that the Confederadoes didn't emigrate to Brazil to retain slavery in their two primary Brazilian cities.

"Many of them bought ranches that had Black slaves," Neeleman told me." But in virtually 90 percent of the cases, they freed the slaves and hired them to continue their work on the ranches. Our research indicated they were frequently quoted as explaining that they wanted to hire their help so they could fire those who weren't working."

And because I'm fascinated by little known bits of history, I find it thought-provoking that the only substantial outmigrations from this country other the Confederates to Brazil, was the migration by freed slaves to West Africa, beginning in the early decades of the 1800s, to settle in and help create the nation of Liberia.

I thought it appropriate that I close with a comment from Annette Gordon-Reed, a Black historian of U.S. slavery, legal scholar, and member of the Presidential Initiative on Harvard and the Legacy of Slavery. She won the Pulitzer Prize and National Book Award for her explosive 2008 work, "The Hemingses of Monticello: An American Family."

Here is what Gordon-Reed, a professor of history and the Charles Warren Professor of American Legal History at Harvard Law School, " offered in an interview on the ambiguity of slavery:

"No one puts a monument up to Washington or Jefferson to promote slavery. The monuments go up because, without Washington, there likely would not have been an American nation. They put up monuments to T.J. because of the Declaration of Independence, which every group has used to make their place in American society. Or they go up because of T.J.'s views on separation of church and state and other values that we hold dear. I think on these two, Washington and Jefferson, in particular, you take the bitter with sweet. The main duty is not to hide the bitter parts"