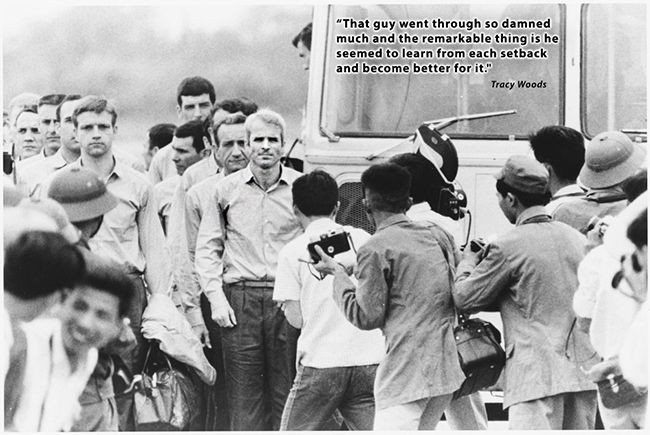 When Tracy Wood heard that John McCain had died, the woman who was the only reporter on hand when McCain and 102 other POWs were released from the Hanoi Hilton in March of 1973, she was "really sad. That guy went through so damned much and the remarkable thing is he seemed to learn from each setback and become better for it."

Tracy Wood on arriving for first POW release
(From the private collection of Tracy Wood)Wood was a 25-year-old reporter for United Press International who had been in Viet Nam for only a year when word came that McCain, who had been imprisoned under constant torture for five years, and the others would be released two months after the agreement between the U.S. and North Vietnamese to end the war.  Wood made up her mind that she would be in Hanoi for the release of the POWs at a time when every reporter was trying to find a way to get to Hanoi. She first tried to set up a press pool (meaning a group of reporters sharing resources) flying into Hanoi from the Philippines.  But, she recalled in a phone interviewSunday, "Nixon himself vetoed any press pool plan, apparently because he didn't want any of the   prisoners photographed and have the photos sent back to this country.""So that meant that I had to try a different way," she said.Thus with a mix of pluck and luck, Wood decided to just ask the North Vietnamese directly for permission to be in Hanoi for the release. And they gave her permission.

Then how to get there, since there was no way for her to merely hop a flight from Saigon? She decided to take commercial flights from Saigon to Bangkok, Thailand, then to Vientiane, Laos, where she caught the Aeroflot flight that was the only commercial connection to Hanoi.

There she learned that AP photographer Horst Faas and an NBC cameraman named Chris Callery were on the same flight, but she proudly notes she was not only the lone reporter but also the only American journalist since Faas was German and Callery from England.

She explained with a laugh that the photo she sent me of her arrival in Hanoi dressed in a miniskirt was because she had dressed for commercial travel rather than for the usual military lift into battle zones in jungle fatigues.

She said the three journalists "got to stand very close" as the POWs were walked through the iron gates at Ly Nam Prison to the plane for their flight to Clark Air Force Base in the Philippines, but they weren't able to talk to McCain or any of the others. She noticed that McCain, 36, his hair graying, limped noticeably as he and the other prisoners walked along a wall from the prison to their waiting flight.

Wood's arrival in Vietnam a year earlier was also a mix of pluck and luck since it was as a reporter in UPI's Sacramento Bureau, at the same time I was a reporter in UPI's Olympia bureau, that she decided she wanted to go to Vietnam. We didn't know each other then, except for bylines we'd occasionally see on UPI's wires.

"Of the more than 2,200 journalists who were accredited by the U.S. military to cover Vietnam between 1965 and 1975, only 70 of them were women and most of those went in only for a short time to cover specific stories, such as someone from their town," she once told me to explain how hard the challenge of getting there would be.

Wood didn't get to Vietnam until 1972 when she was 24 and it took careful planning to get to the New York bureau where her lobbying would be closer to the decisionmakers.

Tracy Wood arriving for final POW release (Cronkite in the background) Her immediate boss on the UPI cables desk didn't think a woman should cover wars. But Wood had the good fortune to work for UPI, whose top editors Roger Tatarian and  H. L. Stevenson believed in the ability of women to report just as well as men, and dispatched several high-visibility female correspondents to the war zone. Then it was Wood's turn.

Wood made two other trips to Hanoi after the one in which McCain was freed, as the POW's were released in stages in 1973.

"On the final trip, we had to rent a plane," she recalled. "CBS was so sure the North Vietnamese would give Walter Cronkite a visa that they tied up every available plane from Hong Kong south, but in the end, Cronkite and the CBS crew had to go on my visa, along with the others in the pool and we all used Cronkite's plane.

"I was afraid he would be furious, but he was incredibly nice and told me I was just doing my job," she added. "Remember, he was a war correspondent for United Press in World War II. Really classy guy."

Wood, who spent years as an investigative reporter for the Los Angeles times after leaving UPI in 1975, is now the editor for the Voice of OC, which bills itself as "Orange County's non-profit, non-partisan newsroom."
Tweet
Tags:
Mike Flynn Government people Politics
International talent on display in Bellevue at wee...
Could insider trading issue stir conflict of inter...