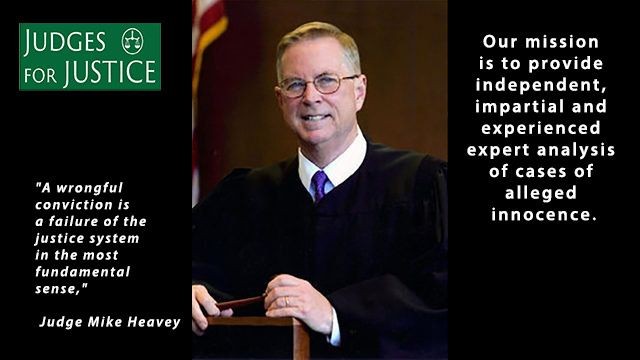 Mike Heavey is a decorated Vietnam veteran, former Washington State legislator and retired King County Superior Court judge who each year marks his now 15-year remission from non-Hodgkin's lymphoma by climbing a mountain, with his 30-year friend, U.S. Sen. Maria Cantwell, sometimes among the climbers.But it's likely Heavey, 72, will want to be best remembered for his creation of an organization called Judges for Justice, which he formed in 2013 to identify wrongful convictions that leave innocent people imprisoned who can only be freed if someone makes the effort to have them exonerated.

Heavey's comments and the phrases that pepper them leave little doubt that the man who spent 14 years in the Washington State legislature and a dozen years as a superior court judge views the conviction and imprisonment of people who turn out to be innocent as a scar on the face of a nation.

"A wrongful conviction is a failure of the justice system in the most fundamental sense," says Heavey.

"Shocking crime generates fear in the community, fear generates pressure on law enforcement, pressure leads to tunnel vision and can create what we call a 'wrongful conviction climate' where the psychological drivers lead to tunnel vision and confirmation bias," says Heavey. The last is a term psychologist's use for the human tendency to interpret new information through the lens of existing convictions.

The case that launched Judges for Justice was one with the highest possible visibility, the trial, conviction, and imprisonment of his daughter's high-school friend, Amanda Knox. He got involved in the case of Knox and Raffaele Sollecito's in 2008, shortly after they were arrested for the murder of Meredith Kercher.

He said he found this case unsettling because his personal knowledge of Amanda, who grew up in his neighborhood, differed so greatly from the portrayal on the news. He began examining the case more closely and said he saw distinct indicators of a wrongful conviction.

He complained about the tactics of the Italian prosecutor, police and prison officials, saying Knox was "in grave danger of being convicted of the murder because of illegal and improper poisoning of public opinion and judicial opinion."

Heavey's ongoing criticism of Italian justice in Knox's case even included a Seattle Rotary presentation that embodied his criticisms. His comments and actions drew a rebuke from the Committee for Judicial Conduct, which said his actions "violated the judicial canons that require judges to 'uphold the integrity and independence of the judiciary' and 'avoid impropriety and the appearance of impropriety in all their activities.'"

Heavey promised not to do it again, as he recalls.

On December 5th, 2009, Amanda and Raffaele were convicted of murder. Amanda spent four years in prison until, finally, on October 3rd, 2011; her conviction was overturned in an appel­late court. Amanda was free to go home to her family. She returned to her home in Seattle, Washington and published a memoir recalling her horrific ordeal.

The effort by Heavey and his nonprofit organization aren't viewed kindly by law enforcement and justice agencies in cases where he has gone on the attack and it is with his current campaign in an explosive case in Hawaii.
It's the case of Dana Ireland, the 23-year-old victim of a Christmas Eve abduction, rape, and murder on the Big Island in 1991. Three men were convicted of the murder and imprisoned.

But in a luncheon speech last month before the Exchange Club of Downtown Honolulu, with the picture of the beautiful young woman on the projection screen behind him, Heavey said the DNA evidence from the crime scene matched none of the men convicted.

Then for emphasis, Heavey said to the audience, "the man who left the DNA, he's the killer. And he's still out there."

The Big Island prosecutor and the Hawaii Innocence Project question his motives, but Heavey presses on with a campaign to reopen the notorious murder case.

In an interview this week for this column, Heavey flatly accuses the prosecutor and the Hawaii Innocence Project of seeking to cover up the fact that the DNA evidence that was uncovered was not disclosed before or after the trial.

That failure, Heavey contends, led to the fact that Frank Pauline, one of the three men convicted of the murder, was himself murdered in a New Mexico prison by a fellow inmate. Heavey and Pauline had had several contacts via email and telephone about the fact undisclosed DNA evidence from a bloody tee-shirt found at the scene of Dana Ireland's murder should have been made available to Pauline' attorney.

The fact that Heavey's efforts get strong pushback from the justice and law enforcement establishments is evidenced by the Hawaii Innocence Project filing a complaint with the Washington State Bar Association over Heavey's involvement in the case.

It was Heavey's work in another case that earned him a nomination for an award from the bar association, an award of merit for what the nomination described as his :"literally thousands of hours over the past four years to achieve the release of Chris Tapp, wrongfully convicted in Idaho of first degree murder and rape."

Thanks to Heavey's efforts, Tapp walked out of the Kootenai County jail in March of 2017, a free man after serving more than 20 years of a life sentence for a crime he didn't commit.

As to Heavey's long remission from the type of cancer that has claimed, among others, Paul Allen and Blake Nordstrom, he explains that
he decided he was going to do all that he could to get better. "I was going to maximize my ability to heal," he said.

In addition to standard Western medical care, he read that diet had a lot to do with spontaneous remissions, so he changed the way he ate, replacing processed foods with fresh fruits and vegetables, and coffee with green tea. He prayed to maximize the spiritual side of healing as well.

"We all have a higher essence down deep, a healing force inside of us. Praying and meditating helps connect with that force," Heavey said.

Mountain climbing became a part of his "healing force" in 2006 when, at the age of 59, he climbed Mt. Rainier for the first time. "I had started hiking with friends after my cancer went into remission and years of back pain went away," he said.

He climbed Rainier every year for five years. He has summited Mt. Hood and Mt. Baker in Washington and Grand Teton in Wyoming. In 2013, he climbed to the "Roof of Africa," the 19,340-foot Mt. Kilimanjaro in Tanzania. "I like to climb because it means I'm healthy," he said.

Cantwell, who was elected to the state House or Representatives the same year Heavey was, has been part of the climbing team on several climbs, including Kilimanjaro, led by their mutual friend, Seattle investment advisor John Rudolf.

To emphasize the importance of his Judges for Justice efforts, which he says will take on a new case in Pennsylvania shortly, Heavey notes that a recent study of those freed after being imprisoned for crimes that they were innocent of finding that 117 of those exonerated had been on death row.
Tweet
Tags:
Mike Flynn Government people issues
WA legislature and Congress in crosshairs over con...
Santa's 'Magic dust' descends on kids & elves via ...