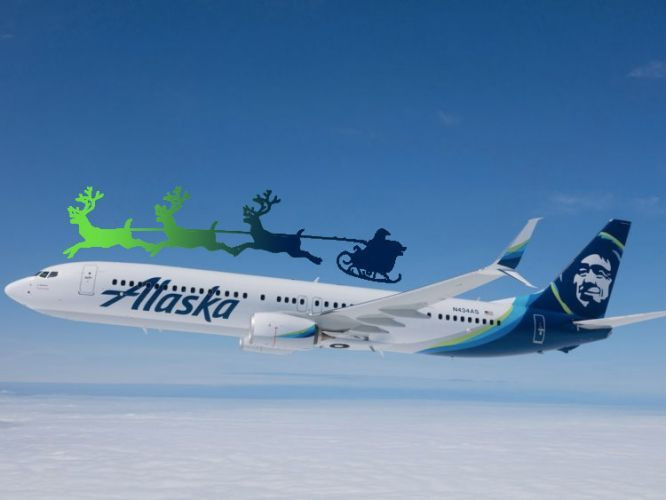 “This Fantasy Flight experience always resets my faith in humanity,” said Eric Hrivnak, the pilot who usually is at the controls of Alaska Airlines’ annual flight from Spokane’s airport to the North Pole with a 737-900 filled with needy kids, and their elves, to visit Santa Clause.

The 15th year of Alaska Airlines’ Fantasy Flight, with this year’s flight taking place Saturday, December 10, with 61 orphans and foster kids and 108 elves aboard, got a special Seattle airing before a Columbia Tower Club audience at an interview with the “elf” who has guided the event for 22 years and two key Alaska employees.

For the Club members and guests on hand last Wednesday to hear from Steve Paul, known as Elf Bernie for this event, and pilot Hrivnak and cabin attendant Carole Scallon, it was a heart-warming experience to hear about what all three described as “the basic goodness of people.”

Or as Hrivnak described it to me before the luncheon interview: “Seeing this incredible group of volunteers help these children experience Christmas makes you believe in Santa Clause.”

“The basic goodness of people” and “faith in humanity” are, unfortunately, phrases that are less likely to come to mind these days. That makes the event all the more important to the adults who make it possible and those who hear of it as to the kids, four to 10, who experience it.

Scallon has actually been involved in the Fantasy Flight since before Alaska became the participating airline in 2008, replacing United, which merely filled one of its Spokane planes and taxied around the airport.

She was aboard in that 2008 initial Alaska Fantasy Flight but told me “before Alaska took over from United, I helped my niece, who was a United Flight attendant.”

“This opportunity has been a gift to me,” she added. “A chance to give back. And I love being with the children laughing, dancing and having fun.” 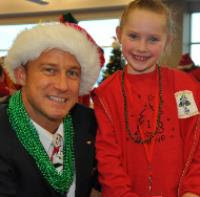 Pilot Eric Hrivnak - "It makes you believe in Santa Claus."United Airlines actually did the fantasy trip from 1999 to 2007 but it was a commitment of the local United team rather than the company itself, with United’s Spokane team corralling an airliner overnighting in Spokane. But because there was no provision for the “flight” to carry the kids aloft, the plane taxied around and stopped at a hangar for the Santa visit.

It was while he was traveling for Itron, the Spokane-based global energy and water management company, that Paul saw a poster at the airport promoting United’s “flight” in 2000, and with that, he was hooked and thereafter took charge of overseeing all the planning and resolving the challenges.

He was asked to step into a leadership role in 2006, and his first crisis came as they prepared for the 2007 flight only to learn that United had no planes available in Spokane. So he recalled, “we had to revert to school buses on the field surrounded by emergency escorts with flashing lights. Actually, it worked because all the windows were fogged up, and the flashing lights as we headed to the North Pole made it very magical.”

“After the 2007 problem, I reached out to United about more of a commitment, including a plan for a plane and a flight,” Paul said. “They had no interest. The Fantasy Flight leadership approached Southwest. They had no interest either.”

“My neighbor knew some people in Alaska’s marketing department, and when I reached out, they were enthusiastic about providing a plane and crew and were quick to say, ‘of course, we can take off.’”

Paul has been president and CEO of Northwest North Pole Adventures, the 501c3 that oversees everything related to planning and carrying out this special event. In his other life, he is a digital IT program manager at Engie Impact, a Spokane energy management company.

Steve Paul, a/k/a "Elf Bernie," has guided the event for 22 years.For longtime readers of The Harp, this story will be familiar because I’ve written of it in each of the past dozen years, since I first learned of it from my friend, Blythe Thimsen, then a Spokane magazine editor who wrote a story on her experience being an elf.

I’ve come to describe the spirit that settles over all those involved as the Magic Dust of Christmas Caring. That magic dust is evidenced by the Spokane residents who help prepare for months for the flight, the businesses that donate all the products that make the event happen, and the Alaska employees who participate as crew and elves. And the airline itself for making its now 15-year commitment to plane, crew, and a large slice of the caring.

Once the flight unloads the children and the elves at the North Pole, it comes time for each child’s personal visit with Santa, who will have received their lists ahead of time. A gift will be selected for each from their lists so Santa can reach into his sack and say, “I got your list. Look here!”

And when I asked Hrivnak for some of his memories of the children and Santa, he left a few dry eyes in the Tower Club audience. So the rest of this column belongs to him in his notes to me:

"2011 was the first time I was involved with this charity.  I picked up the 'turn,' which is a single, one-day trip.  I was just looking for a little extra Christmas money.  A day prior to the turn, I received an email stating I would be flying the Spokane Fantasy Flight for 60 children. I was not sure what this was about, but I knew it was related to Christmas. (Thankfully, I at least had a Santa tie.)

On the way over to Spokane, Carole briefed me on the flight.  I decided to come up with a flight profile that would be entertaining for the kids. 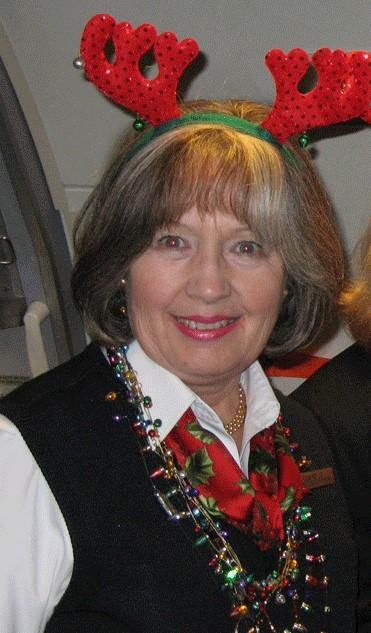 Flight attendant Carole Scallon - 'This opportunity has been a gift to me'After experiencing the 'North Pole for the first time, I was hooked and knew I had to be involved with this charity.  It was a life-altering experience that made me thankful for how good my life was from being a professional Pilot.  I felt a duty to give these kids the proper experience of flight.

The following year, I learned how to work with the kids before the flight.  I gave them red and green beads from Carole, signed their passports, and asked them about their flight experience.  I’d make sure to help the ones that are really nervous about flying. For most of the children on this flight, it is their first time in a real airplane.

Since 2011, I have flown this Fantasy Flight eight times as a First Officer and once as a Captain.  Each time, there was a story that affected me from a touching moment of the day.

There used to be other airlines that did Christmas flights to one extent or another for needy kids, but 2020 halted all. And a search in preparation for this column didn’t turn up any such holiday trips, an indication that Alaska, which resumed the flight in 2021, is now alone in providing this annual trip for children.

Tweet
Tags:
Mike Flynn business corporations people
Before there was basketball at Gonzaga there was f...
Three 'women of influence' in Cle Elum could compe...

More posts from author
Friday, 20 January 2023 The story of two boy baseball fans whose business success led them own their hometown teams
Tuesday, 27 December 2022 Before there was basketball at Gonzaga there was football, including a Christmas Day bowl game a century ago
Monday, 05 December 2022 Three 'women of influence' in Cle Elum could compete with any for their focus on the region, and the planet