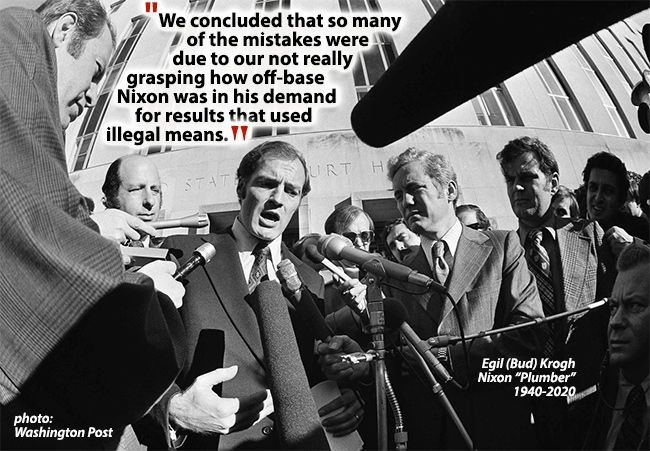 Egil (Bud) Krogh took personal responsibility for the fall of a president and ever after cautioned against the "meltdown of personal integrity" that can accompany excessive loyalty to a president and the power of the office. Thus some with an ironic sense of history may evidence a thoughtful pause at the word that Krogh died quietly last Saturday at the age of 80, two days after the commencement of the impeachment trial of President Donald Trump.

The disgraced presidency of Richard Nixon is the stuff of history books. But for Bud Krogh, the memories that remained vivid for the rest of his life were of condemnation and redemption for the role he played and the belief that the events that led to the fall of the president need be kept ever in mind by both presidents and those who work for them. 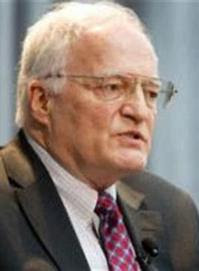 Egil (Bud) KroghWhat follows is taken from a column I did on Krogh, with whom I became friends as the 40th anniversary of the 1968 campaign that brought Nixon to the presidency came about. And I did several interviews with him before various Seattle audiences.

Krogh, who had just passed the bar in 1968 after graduating from law school at the University of Washington, actually didn't have a part in Nixon's campaign. Instead, being left to run the Seattle law practice of John Ehrlichman, the prominent Seattle attorney who helped engineer Nixon's eventual general-election victory in 1968.

But after the election, Krogh was asked to join the White House team as personal attorney to the president and staff assistant to Ehrlichman, who was one of the handful of men who basically ran the White House and thus the country until Watergate brought them all down.

The many books on Nixon and Watergate detail how Krogh, who was caught up in the scandal, was named by Ehrlichman to guide the "Special Investigations Unit" that came to be known as "the plumbers," whose charge was to stop the leaks to the media after the New York Times published the Pentagon Papers.

That led to the break-in at the office of the psychiatrist of Daniel Ellsberg, whose release of the Pentagon Papers to the New York Times had helped create a siege mentality in the Nixon White House. Krogh's role eventually led to a prison sentence after he pled guilty to criminal conspiracy for engineering the break-in.

Krogh recalled in our conversations and interviews how after Nixon's resignation, his path of reconciliation involved a visit with Fielding to apologize to him for Krogh's unacceptable violation of the rights of "a genuinely decent human being."

And Krogh and Ellsberg became friends, with Ellsburg writing the forward comments for Krogh's book.

Then followed a visit with Nixon in California in which Krogh recalls basically saying: "Mr. President. I apologize to you because everything that's happened was really my fault."
I asked Krogh over lunch in 2008 if he and Ehrlichman, who also went to prison for his part in the events, had ever had the opportunity to talk through what had gone wrong. "John and I had several opportunities to visit after we were in prison, about what happened and why," he said. "We concluded that so many of the mistakes were due to our not grasping how off-base Nixon was in his demand for results that used illegal means."

Loyalty to 'the man' was the over-arching requirement for service on that staff." And it is the flaw of misguided loyalty that Krogh has remained ever convinced that presidents and their staff members must be vigilant to avoid. That commitment included his caution about "reliance on hazy, loose notions about 'national security' and 'commander in chief' and what such notions can be tortured into meaning."

Krogh left Seattle and his law practice in 2011 to join the Center for the Study of the Presidency and Congress as a Senior Fellow on Leadership, Ethics, and Integrity.

We last talked in 2012 as I caught up with him by phone as he was en route to a Pennsylvania speaking engagement. The time was near the anniversary of Watergate and I asked him if the book was still successful. "It's selling better now than at the beginning," he replied. "The issue of government integrity seems more relevant to people today."

By then his personal focus had become zeroing in on the School for Ethics and Global Leadership, which attracts high school students, and it was in that environment of sharing his philosophy with young people that he honed his Integrity Zone concept.

The concept of the Integrity Zone was based on a couple of fundamental considerations. The first is to challenge the process of thinking that precedes decisions, basically: "have I thought through all the implications?" while the second part is ethical considerations: "Is it right? Is this decision in alignment with basic values like fairness and respect?"

"We never asked any of those questions in the Nixon White House," Krogh told me. "And most of what we see in Congress today fails those tests. Instead, we see a focus on loyalty and fealty to party. You simply can't check your integrity at the door."