The long-awaited autobiography of Daniel J. Evans, governor, U.S. senator, college president, and six-plus decades as a civic leader, was well worth the wait and offers more than a look at the deeds and accomplishments of a man who is viewed as likely the most important political figure in Washington state’s history.

It also offers the first broad telling of what may be one of the most intriguing civil rights stories never fully told before, one that I’m hopeful is destined to finally bring national recognition to Evans and Arthur Fletcher, the black political figure Evans reached out to in the late '60s and who went on to become the Father of Affirmative Action.

The autobiography gives an important historical look at the bright young professionals Evans describes as "a lively mix of lawyers, accountants, engineers, contractors, real estate developers and
businessman," a group basically composed of young republicans and Jaycees, whose leadership in the early 1950s included the creation of an organization called the Seattle Municipal League, whose grades for political candidates made it a prominent influence on local elections.

Its members, including Evans and a group of then age ‘30s professionals, all veterans, some of whom would become part of his political team a decade later, brought a political acumen that changed the face of a Seattle in which “city hall and the courthouse were patronage mills and where police winked at gambling and prostitution corruption. In addition Seattle merely looked on as its “burgeoning bedroom communities were dumping raw and partially treated sewage into Lake Washington at the rate of 20 million gallons a day.” 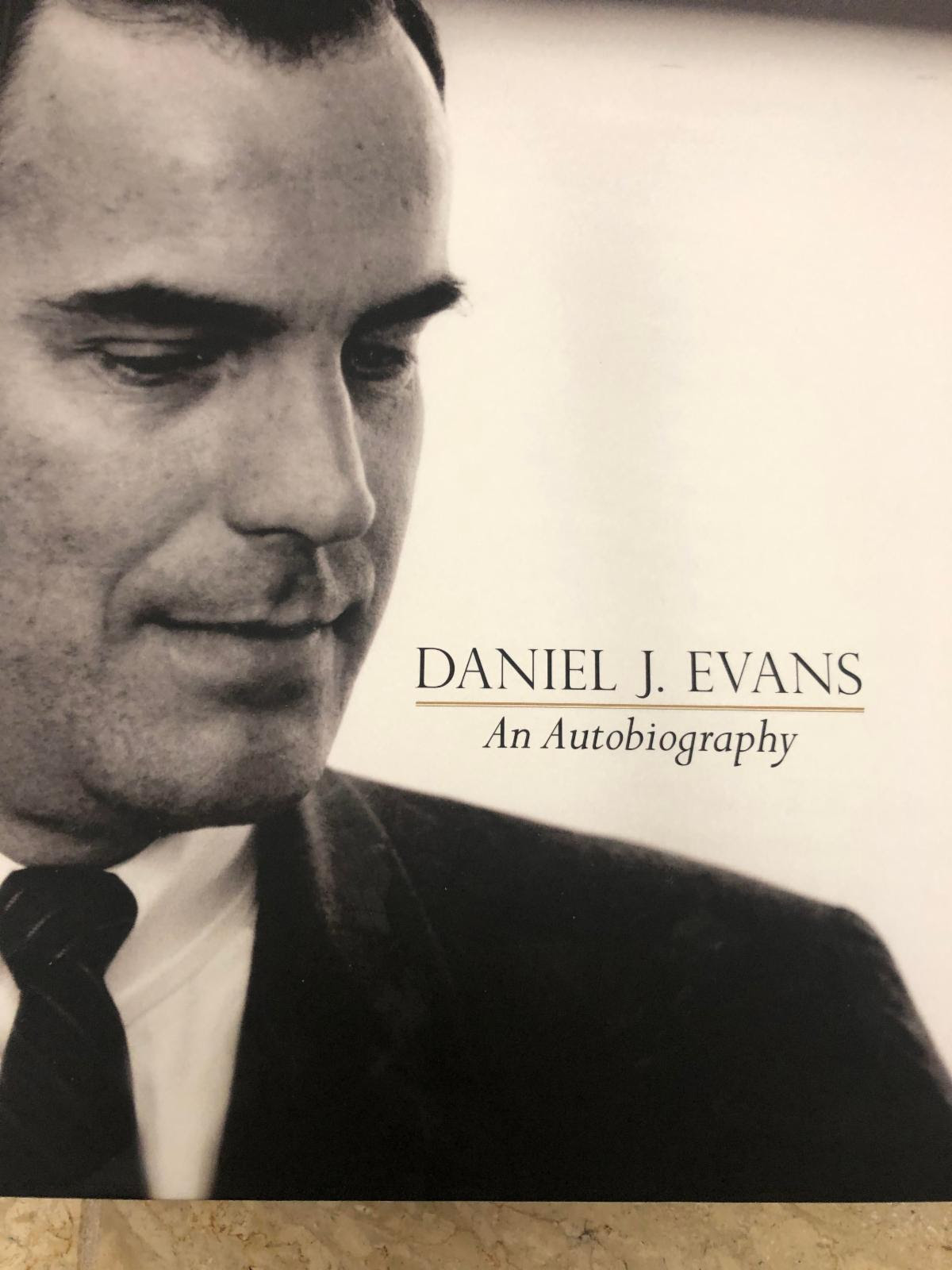 Dan EvansThat group of young professionals who would change Seattle included future congressman and lieutenant governor Joel Pritchard and future attorney general and U.S. Senator Slade Gorton. And Jim Ellis, the young attorney whose half-century of citizen activism included cleaning up Lake Washington and voter approval of his Forward Thrust bond package that included The Kingdome, that provided a home for the baseball Mariners and pro football Seahawks when those teams came into existence.

I chuckled at the likely reaction of Seattle’s current emerging political and civic leaders to learn that it was a cadre of young Republicans who were the city’s first civic movers and shakers.

In the late ‘60s, after Evans had been elected governor, the second youth cadre he nurtured sprang from the ranks of young Republicans. The following passage from the biography indicates how the stage was set for the emergence of Fletcher.

"Sam Reed (who later became a three-term Secretary of State) and Chris Bayley, two of the brightest young guys I’d ever met, launched a political action movement in 1968 that harnessed the restless energy of a new generation of moderate Republicans. They were frustrated by Vietnam and passionate about civil rights.

"'Action for Washington' was the genesis of today’s Mainstream Republicans of Washington. Back then they called themselves 'Dan Evans Republicans.' For me, it was an honor and a responsibility rolled into one.

"Christopher T. Bayley, a descendant of one of Seattle’s most respected old-line families, arrived back home with a law degree from Harvard in 1966. Sam Sumner Reed, the grandson of Wenatchee’s leading lawyer, became executive director of my Urban Affairs Council in 1967 after receiving a master’s degree in political science from Washington State University.

"Bayley, 29, landed at Perkins Coie, a top Seattle law firm. He had extensive contacts among King County’s politically ambitious young reformers, not to mention large donors. Reed, 27, had founded the College Republican League of Washington in the fall of 1967. He knew energetic young Republicans on campuses around the state."

Evans recalls one of Reed’s first assignments as an intern in the governor's office was to work with Secretary of State Lud Kramer, House GOP leader Slade Gorton, and Seattle civic activist Jim Ellis to draft an urban affairs report.

When Reed met Pasco City Councilman Art Fletcher he saw a rising star. A football star at Washburn University in Kansas, and the first black player on the old Baltimore Colts team in 1950, Fletcher organized a community self-help program in predominantly black East Pasco after moving to the Tri-Cities to work at the Hanford nuclear site. Fletcher radiated charisma.

As Evans wrote: "The Reed-Bayley masterstroke was to create the first, and to date only, effective party ticket in Washington State history. They dubbed us 'The Action Team for an action time.' Each flier, full-page ad, and TV spot featured our foursome, three young white men and one black, as Evans noted, “striding forward side by side with clean-cut confidence.”

Arthur Fletcher had already built a reputation in other parts of the country for activities that set him on the road to becoming a political anomaly as a Republican civil rights activist. Evans viewed him as the type of political leader who could bridge racial differences at a time of high local and national racial tensions.

I had the good fortune, as UPI's state political editor in Olympia, to meet and interview Fletcher in early 1968 after Evans’ press secretary, Neil McReynolds, flagged me about “this cool guy in the Tri-Cities whom Dan has been very impressed with.” Soon other Puget Sound area reporters also wrote about him, which helped propel him into an attention-getting role with Washington voters.

Evans, an engineer by education, engineered the fletcher role in the quest, with enthusiastic support, for the lieutenant governor's race against popular Democratic incumbent John Cherberg. In the end, he lost.

At the 1968 Republican National Convention, for which Evans was the keynoter, Fletcher had a role promoting his self-help philosophy to an audience eager to attract black voters. Among those drawn to Fletcher's convention message was Nixon himself.

Soon after taking office, Nixon appointed Fletcher Assistant Secretary of Labor for Employment Standards. With responsibility for the wage and hour regulations for the nation's workforce and supervision of the Office of Federal Contract Compliance, Fletcher now had the power to revoke federal contracts and debar contractors from bidding on future work.

But after two years, Fletcher's affirmative action programs had earned him so much enmity among the leaders of the skilled construction unions that he was forced to resign.
President Nixon gave him a brief assignment on the United Nations delegation under Ambassador George H.W. Bush, which began the friendship that would take Fletcher's political career to even greater heights.

He went on to serve in the administrations of Ford, Reagan, and George H.W. Bush and became known as the “father of affirmative action.” Fletcher headed the U.S. Commission on Civil Rights, and as president of the United Negro College Fund coined the phrase “A mind is a terrible thing to waste.”

“Those were remarkable achievements,” Evans has said to me on several occasions in recent years as we discussed Fletcher. “But how I wish Washington could have been the first state in the union since Reconstruction to elect an African-American governor. That would have been a proud boast.”

When Evans shared with me passages about Fletcher from his autobiography four years ago, he said: "I'm confident that if Art Fletcher had been elected lieutenant governor he would have succeeded me, perhaps in 1977. In any case, sooner rather than later."

"He later had remarkable achievements, but how I wish Washington could have been the first state in the union since Reconstruction to elect an African-American governor. That would have been a proud boast. It could have had a huge impact on race relations and who knows how history could have changed.”

Evans' reflections on Fletcher, with whom he remained friends until his death in 2005, have been key parts of interviews I’ve done with Evans in the past couple of years, two at the Columbia Tower Club, including in fall of 2019 and another last fall for Seattle Rotary, done remotely since the club wasn’t having live programs that month.
Regular readers of The Harp may recall a column I did four years ago on the Evans-Fletcher story, a half-century anniversary piece, As I wrote it, I realized that 1,700 readers were a dramatically small number to know about the story.

So I reached out to Mark Higgins, assistant editorial page editor of the Seattle Times, to offer him the column and he first explained that The Times doesn’t run a piece that has already appeared as a column elsewhere.
But he soon decided, on reflection, and much to his credit, that the Evans-Fletcher story deserved being brought to The Times readership. So the Harp appeared as an op-ed piece under the headline: ‘Remembering Arthur Fletcher, the father of Affirmative Action.”

In fact, in terms of national visibility, if you search Wikipedia for Fletcher, there’s a brief look at his accomplishments. And there is one media source reference. Seattle Times: Remembering Arthur Fletcher, Father of Affirmative Action (Mike Flynn, Nov. 11, 20128)

John Hughes, former editor, and publisher of the Aberdeen World, who edited the autobiography, remembers meeting Evans in Olympia in 1966 when he was a reporter for The World.

He told me he began helping Evans five years ago, noting that at the time Evans had written about 300,000 words but the manuscript ended when he left the U.S, Senate in 1989.

"I'd liken my role in Dan's marvelous book to that of a consulting structural engineer. (Ever the engineer, that line will make Dan smile)."

Hughes, now chief historian with Legacy Washington in the Secretary of State's office, recalls "Almost exactly a year ago, Secretary of State Kim Wyman asked me how Dan was doing on the book. Sighing, I said it was still unfinished. Then in a spontaneous moment, I suggested we help him finish the narrative and publish the autobiography as a Legacy book. 'Absolutely!' she said."

"From February to October, I conducted oral history interviews with Dan to speed up the process. He'd review the transcripts, then I'd weave them into chapters."

"I think it's a hugely important book, particularly at this moment in our political history.
Dan's memorable declaration that he 'would rather cross the political aisle than cross the people' reminds us that politics doesn't have to be fear and loathing."

Now as national book reviewers get their copies, I'm hopeful they'll focus on the Evans-Fletcher segment.

Then perhaps my goal of seeing some ongoing national recognition come about for what their relationship meant, both in Evans' original goal and the way it paved the road for Fletcher's future, will begin attracting attention in high levels.