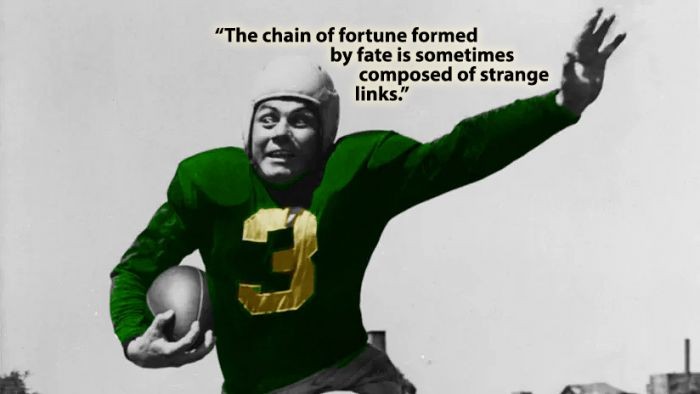 While the Green Bay Packers were the enemy to fans looking on at TV screens in Seattle Sunday as they ended the playoff hopes of the Seattle Seahawks, it's an interesting sports history footnote that there was a time when Spokane area football fans were among the Packers' most ardent fans.

That was because a Gonzaga Bulldog running back was at the forefront of Green Bay's offense in the '40s. In fact, Anthony Robert (Tony) Canadeo set the Packers' career rushing record, carving out 4,000 yards during his career from 1941 to 1952 even though he lost almost three years for World War II service in the U.S. Army

In fact, Canadeo, who was not just the star running back for the Packers but in some years a key passer, set the single-season rushing record of 1,052 yards in 1949, then only the third NFL player to have a 1,000-yard season.

He was not only the Packers' leading rusher in 1943 but also their leading passer. Additionally, he caught two touchdown passes that year.

Canadeo's career offered proof of one of my favorite sayings, that the chain of fortune formed by fate is sometimes composed of strange links. Fate played a role in his arrival at Gonzaga and at Green Bay.

He actually got to Gonzaga by accident. That was because a high school friend of his in Chicago who was offered a football scholarship by Gonzaga made it clear he wasn't coming to Gonzaga unless his friend also got a scholarship. So Tony came to Spokane to play football with a friend long since forgotten.

Canadeo, who was known as the "Gray Ghost of Gonzaga" because of his prematurely gray hair, was selected by the Packers in the 9th round, as the 77th overall pick in the 1941 NFL draft.

And in fact, it was by accident that he was available to Packers' coach Curley Lambeau to draft.

Seems that Ray Flaherty, the NFL all-star end who had played his college football at Gonzaga before becoming one of the NFL's most successful coaches with the Washington Redskins, had intended to draft Canadeo but figured other teams would bypass him and he'd be available when Flaherty got around to him.

Flaherty, who always returned home to Spokane in the offseason, told me once during an interview in the late '60s at his Northern Idaho home that his friends always pressed him to draft the top Gonzaga players and he chuckled as he said he got a lot of heat from those friends for letting Canadeo get away.

And a year later, when Flaherty's Redskins won the 1941 NFL title, he had Gonzaga Bulldogs Ray and Cecil Hare in his backfield, likely one of the few if not only times that an NFL champion had two running backs from the same small college, and brothers, in the backfield.

In fact, Flaherty's Redskins held their training camp in Spokane in 1940 and 1941.

It wasn't until Jim Brown became the Packers' star running back in the late '50s that Canadeo's records fell.

And both Canadeo and Flaherty are in the NFL Hall of Fame, Flaherty as a coach and Canadeo as a player.

Tweet
Tags:
Mike Flynn people issues
Bud Krogh's lessons from the fall of a president
PART 2 - A Decade of the most memorable Harps