The Seattle Port Commission's airing of the decision by the Port of Seattle staff not to renew the airport lease of Ivar's seafood chain left the port staff looking a little like the baseball team that sent a minor league pitcher to face the leading home run hitter. Bad news ahead.

And unless the port has become an organization of people too new to understand the game, they have to be aware that bad news in the form of community pushback is what awaits if they throw the pitch, which in this case is tossing Ivar's Fish Bar out of the ranks of airport concessionaires. 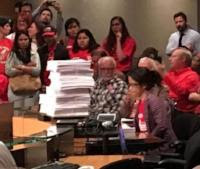 The heavy hitter, partly because of the iconic restaurant chain he heads and partly because of the community support this issue generated going into the port commission's regular meeting Tuesday, was Ivar's president Bob Donegan. A generally congenial and friendly guy, Donegan leveled a withering indictment of the selection process by which the port's staff decided not to have Ivar's continue to operate the spot it has held in the central terminal since 2005.

Among Donegan's summary comments, each or which included details was that the process was flawed, the interview was "a sham," the evaluation panel "was simply not qualified" and the "scoring was seriously flawed."

Amid demonstration of support for Ivar's, including delivery of a stack of 7,600 supportive emails stacked on a wagon that Ivar's shift manager Lisa Bray wheeled in, the port commission upheld the decision of port staff.

That was in spite of the fact that a few days before the commission's meeting, Port Commissioner Stephanie Bowman said protest mechanisms created by port staff for companies that lose bids for airport concessions are flawed.

And although Bowman supported the staff's decision, her comments about the appeal process are likely to help fuel community indignation that may well congeal in the days ahead.

Bowman was quoted as saying "The protest procedure designed by port staff does not meet the standards I have for fairness and transparency, which is frustrating for those who were not winning bidders, and an unacceptable gap in the competitive process."

The phrases that were offered by prominent people in the business community I talked with in preparing this column were "legacy" and "community interest." And it's those thoughts that are likely to fuel community discussion of the port's decision and the process in the coming days.

"I couldn't believe it," was the first reaction from retired Port of Seattle executive Don Lorentz, who guided the port's commerce and trade development operations, basically its overseas activity.

"The port in many ways is run as a business, but it's not a business, it's there for community interest as well," Lorentz said.

In fact, the port is a government agency created by the voters of King County and supported by residents of the county, whose $72 million property tax levy this year represents about 11 percent of the Port's $620 million budget.

Lorentz noted that even though the ferry service changed the company that operates its food services, "they made it clear they are still going to have Ivar's clam chowder."

One of the points made to me in interviews was that perhaps the airport of a city, even an international city like Seattle, should strive to give visitors a flavor of the place where they are arriving by providing "legacy" status to certain airport vendors.

"The airport is a local experience for those who come here and the vendors should reflect the flavor of the area," one suggested. "Ivar's is a wonderful example of Seattle legacy and once a legacy is lost, it won't come back and it's our job to guard against that."

The port commission should ensure there is a provision in the vendor vetting process for legacy vendors, when in fact there's almost a penalty factor since a key to the criteria points is being a small, new business.

The port commission, which apparently is already considering changes to the evaluation process for the next round of bids, has its next regular meeting June 27, and the process for those 12 restaurant spaces that go up for bid this summer could be altered to improve shortcomings.

One change would seem to be creating greater transparency, since Donegan told me "when they sent us the 10 pages of written comment and numbers that were our scoring criteria, I asked if we could see the evaluation of the others and they said we could if we would sign a release that included no protest."

I asked Donegan if Ivar's could bid on one of those 12 upcoming and he said, "Yes, we could, but unless the port changes the scoring criteria, it's hard for me to see how there'd be any different outcome."