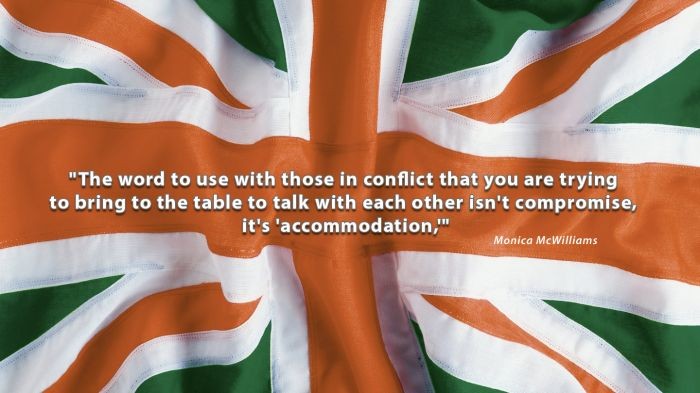 Monica McWilliams, who played a key role in negotiating the Belfast Good Friday Agreement and was the only woman to sign the pact that ended decades of violence in Northern Ireland, never brought the idea of compromise to any negotiations.

"Compromise is a weak word," she told me in an interview recently in Seattle, where she was visiting for the first time to appear at a fundraising event for the Northern Ireland Human Rights Fund.

"The word to use with those in conflict that you are trying to bring to the table to talk with each other isn't compromise, it's 'accommodation,'" McWilliams said. "When you say to those who refuse to compromise with their enemy 'but you understand we need to reach some accommodation with these people if we are going to end the fighting,' there is always at least a grudging agreement to accommodate each other's views somehow to settle the conflict."

The Seattle visit was arranged by Microsoft alum RoseMarie FitzSimons, now an Irish filmmaker who still retains a home in Seattle, which she visits from Ireland several times a year. But she has mostly been on the road for months, following McWilliams on her travels to countries in turmoil around the world.

Thus this column is to focus attention on the efforts of
two Irish women who have sought to create a political future that includes the voice of women in peace negotiations that inevitably emerge in war-torn regions.
One is McWilliams, raised in Northern Ireland, who was a leader among women who saw an opportunity to break what they viewed as the closed circle of male power that had dominated Northern Ireland politics for years and to create a new political future that included the voices of women. She hopes to create a process to end bloody contests not just in her native nation but in disputes around the globe.

The other, FitzSimons, a woman who grew up in the Irish Republic 70 miles from the border but saw "the violence happen every day in my backyard." She is directing her film-making talents to bring McWilliams' story and the changes she has brought about to a broad audience.

FitzSimons said part of the impetus for documenting the role McWilliams has played is "the archaic mindset of those in politics, the arrogance and attitudes that prevailed in patriarchal Northern Ireland at the time, that saw neither the value nor importance of women participating in the peace talks."
"Some of the men gathered for the talks made comments like "the only table women should be at is the one they're going to polish," FitzSimons told me. "Sectarian and sexist insults were common. Comments like the women 'should stay at home and breed for Ulster,' or that their place was to 'stand behind the loyal men of Ulster', at which point McWilliams and her colleagues stood up and started to sing 'Stand By Your Man.'"
It was the women of Northern Ireland who pressed the men to the negotiating table when they said, basically, "we don't want to be a country that is made up of widows so this has to stop."

Being reminded of that point prompted McWilliams to tell me: "women are always involved in working the community silently so they merely get a footnote in the history of conflicts. Less than 4 percent of peace agreements have women signators."

McWilliams already had a tie to Seattle, in addition to working closely with FitzSimons, because it was she who brought Boston police commissioner, now Seattle police chief, Kathleen O'Toole to Ireland.

That came about as McWilliams was visiting Boston and met O'Toole, who was serving as the first female police commissioner, and decided "it might be really good to have women on the commission to reform Ireland's police so I recommended her."

Thus O'Toole became a member of the commission and eventually chief inspector of the oversight body responsible for bringing reforms to the 17,000 member Irish national police service.

A champion for human rights, women's rights and equality, McWilliams' focus is also international, sharing Northern Ireland's lessons of peace-building with other countries seeking to emerge from conflict, ranging from Colombia, Syria and Myanmar to the Israel-Palestinian conflict. She likes to say they are places where "violence of the tongue has led to violence of the guns."

FitzSimons sought out McWilliams four years ago, soon after ending a 19-year career at Microsoft to concentrate on filmmaking, specifically to do a film about the lessons of the peace process but it soon became a film to focus on the role of women in peace negotiations in all countries.

"With my film, I'm connecting the role of women and civil society in peacemaking and bringing the Northern Ireland women's story into a contemporary context," FitzSimons said.

"I just got back from Gaziantep, Turkey," Fitzsimons emailed me recently. "I was there to film Monica as she worked with the Syrians. With my film I'm connecting the role of women and civil society in peacemaking and bringing the Northern Ireland women's story into a contemporary context."
She hopes to complete the film late this year or early next, FitzSimons said, noting that "because of the human rights violations and violence women suffer, when they negotiate it's not about land but rather a focus on the future for their children and for society."

When I asked FitzSimons where her film's working title, "Wave Goodbye to Dinosaurs," came, from she explained: "A group of women holding a planning meeting in Belfast came up with that phrase for a poster to market what they were doing."

"One man said 'why are you calling us dinosaurs?' FitzSimons explained, to which she said McWilliams replied 'Do you see your name on that poster? Stop identifying yourself with the dinosaurs.'"
Tweet
Tags:
Mike Flynn Government Peace Talks RoseMarie FitzSimons Monica McWilliams Northern Irreland'
Seattle mayor race may offer business hope for fut...
Personal reflections on Mike Lowry, passionate bel...