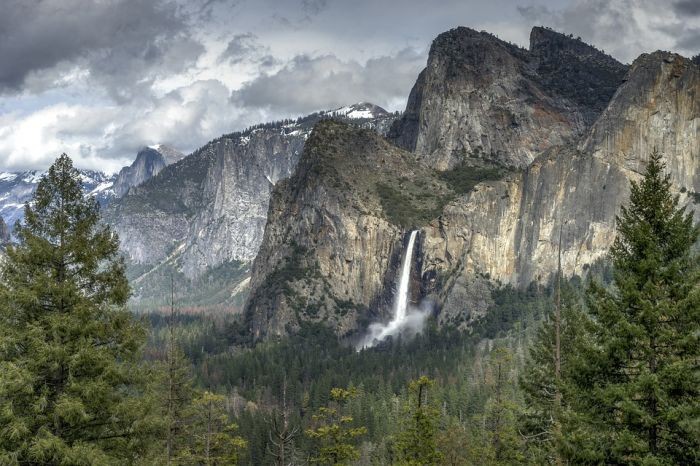 Yosemite National Park is just one of the places that NatureBridge takes over 35,000 kids to learn each year.

The arrival of National Parks Week in the midst of COVID-19 closure of most national parks is a sad reminder for those who enjoy nature and the wilderness. But for an organization focused on the parks as learning centers for young people the closure poses a concern for what the future holds.

The organization is NatureBridge, a nonprofit that brings kids to national parks to spend days learning about science and the environment as they discover the pleasure of the outdoors while spending time with other young people.

Closure of the parks means the organization's programs that bring 35,000 kids, mostly ages 12 to 16, to Yosemite and Golden Gate in California, Olympic in Washington State, and Prince William Forest Park near Washington, D.C.

Robert Holmes, a NatureBridge board member for whom the call of the wild has been a lifetime personal counterpoint to his role as a developer of both real estate and resort projects across North America, sees the closure as a "crisis."

A year ago the organization was preparing for its early May annual fund-raiser at the Iconic Bentley Reserve in San Francisco's Financial District where 300 attendees would spend "An Evening with NatureBridge."

The event brought people together to celebrate another year of cultivating the next generation of environmental stewards and raised $650,000.

This year's event in early May in San Francisco has been canceled. And while the website calls visitors to "raise a paddle" for virtual donations, no one knows how much will be raised from would-be attendees, sponsors and supporters to avert what Holmes says is a looming revenue hole.

"In addition to the fact that  35,000 not 13,000 kids don't get to experience their national parks this year, our nonprofit will experience $5 million in lost revenue and significant staff reductions," Holmes said. "We, like so many others, are in crisis, which threatens NatureBridge's ability to continue its mission on the other side of this pandemic."

Holmes recognizes that the crisis facing NatureBridge is no different than that facing a myriad of other organizations and non-profits whose fund-raising events have been canceled or put on hold across the region and the country.

But Holmes, CEO of THG LLC (The Holmes Group) in Bellevue, has made a personal commitment to help make sure (if he can) that NatureBridge will be back to prepare for its 50th anniversary year in 2021.

In an email to friends and associates this past week, Holmes said "NatureBridge needs to survive this - for our parks, for our planet and, most importantly, for our kids. To that end, I am matching all donations (up to $25,000) made to NatureBridge before June 30."

And Holmes said there will be a video interview with Dr. Nooshin Razani, a NatureBridge alum who is now an infectious disease specialist in Oakland and the video is likely to accompanied by an ask, as has become the virtual substitute for an actual fund-raising gathering for a host of organization.

The students NatureBridge reaches usually apply through science teacher though in some cases whole classes attend or, as Holmes noted, "in some cases, like Cupertino, all the students from the school attend."

For those whose parents can't pay, students can get scholarships and financial support through NatureBridge,

This was not meant to be a column about Holmes. It's about his cause for which he has stepped into the breach to see if through the dollars he generates, along with other board members and their supporters, they can save the future for Nature Bridge.

But inevitably, a cause is judged, in part, by the quality and influence of its supporters.
Holmes' many involvements and adventures in the wilderness likely have played a role in some of his resort development efforts in addition to his commitment to NatureBridge.

He's made parachuting the sky-high part of his outdoors experience and focus since he helped create a parachute club as a freshman at Central Washington University and he recalls "we often jumped into college games and events."

Since then he has done "1,200 or so jumps," including tricky, multi-person jumps of up to 10 people that have led to skydiver performance awards and recognition.

"As a skydiver, I created wilderness jumps, including jumps into Mount Jefferson and then Mount Washington," Holmes recalled, adding "at the grand opening of the Inn at 7th Mountain in Bend, three of us parachuted in and that evening I met Lute Jerstad, who had climbed Mount Everest with Willi Unsoeld."

He says the jump into Mountain Jefferson and the climb that followed is what hooked him on mountaineering so he signed up for Jerstad's climbing school, But a climb on the north face of Mount Stewart came close to costing him his life as he fell about 80 feet and landed on a ledge, breaking his back. He spent 24 hours on the ledge before being rescued.

As to the future, Holmes told me "We will be successful and will come back. The cause and the kids are too important." CLICK HERE to learn more and help NatureBridge help the children.