Only 1 block - and 3 decades - to the Oregon Supreme Court

From her window in the Oregon Supreme Court Building, the state’s newest Supreme Court justice can look across State Street in Salem to the Willamette University campus where her higher-education journey began 31 years ago.

Meagan Flynn, already Judge Flynn as an Oregon appellate court judge since October of 2014, was sworn in last week by Chief Justice Thomas Balmer after being named by Gov. Kate Brown to the state’s highest court. She’ll have a new office but the surroundings will be familiar since both the supreme and appellate courts share the same courtroom.

The governor said in a statement that “Flynn has earned a reputation as a smart and thoughtful judge while serving on the Oregon Court of Appeals and is regarded as fair-minded and compassionate.”

Indeed those who know her would echo that, particularly her parents who left her standing on the sidewalk in front of Willamette waving goodbye 31 years ago. And as Betsy and I drove away then and headed back to Seattle, past the Supreme Court building, Oregon’s oldest government building, we had no way of imagining it would be where she would eventually office. 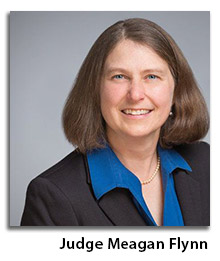 As readers of The Harp have guessed by now, this is a personal column, a reflection on our daughter, mother of two of our grandchildren, who wears the judge’s robe.

Meagan had a goal of being an attorney from early on because her role model was her cousin, Sheila McKinnon, who was then a successful Seattle attorney.

Some of the following is reflections about Meagan from an earlier column I did when she was appointed to the Court of Appeals judgeship.

I recalled that as she prepared to graduate from Holy Names Academy in Seattle, where she was salutatorian of her class, I urged her to apply to Stanford because her friend, who was valedictorian, was applying there.

"It would be cool if you could say you were accepted to Stanford," I told her, even though I knew she had already decided she wanted to attend Willamette.

To my surprise, though likely not hers, she was accepted to Stanford and I feared she would decide she wanted to go there since it would have been a financial challenge for us at that time.

But the ducks on the stream at Willamette, which were the initial attraction the day she first visited the school (although its academic reputation and its law school had roles in the final decision), had already drawn her interest to Willamette.

Good thing, since that's where she met her husband to be, Dan Keppler, who was also intent on become an attorney, though eventually Gonzaga law school won out for both of them and after graduating they built partner-role practices at separate small firms in Portland. Along the way also came two daughters.

Meagan always had a competitive bent, which she usually did a good job of hiding, except as a seventh grader in Piedmont, CA, when she found that a male student was challenging her for top student. Her jaw always locked a bit when the male student’s name came up in conversations. The two of them ran for 8th grade class president (except the title was commissioner general) in a hotly contested race that she won, expressing smug pleasure at coming out on top.

The call from Governor Brown was the second from an Oregon governor for Meagan since then-Gov. John Kitzhauber was on the line one evening when she answered the phone. The story comes from her husband, Dan, since Meagan is not one to talk much about herself.

As Dan related of the telephone conversation: “’Hi, Meagan, this is John Kitzhauber.’ ‘Hi, Governor.’ ‘So do you want to be on the appellate court?’ ‘Yes, I do.’ ‘Congratulations, Judge.’”

Of course, due diligence had preceded the call, as it did with the appointment to the highest court late last month.

When she was sworn in to her Court of Appeals post in 2014, the judge administering the oath was the same judge whom she had gone to work for as a clerk 20 years earlier, soon after he had taken his oath as a then-new appeals court judge himself. He brought to her swearing-in session a picture of that first clerk-judge meeting in 1994.

Meagan is taking her place on the state’s highest court as its youngest, as well as newest, member.