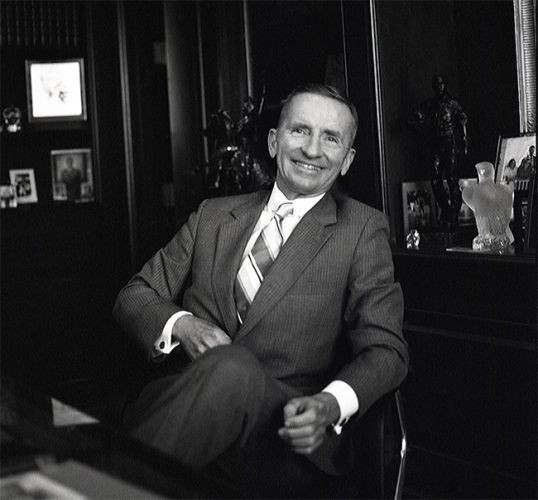 H. Ross Perot had a dramatic and lasting impact on the lives of two Washington residents, one a high school coach who became nationally known for his work with disabled athletes and later physically and emotionally disabled veterans and the other a young man born without hands or feet who became the world's most famous Paralympics runner.Perot, the billionaire philanthropist turned politician who carried a third-party candidacy into the presidential battles of 1992 and 1996, died of Leukemia Tuesday in Dallas at the age of 89.

Bryan Hoddle"I've cried three times in my life, and one was when I learned Tuesday of Ross Perot's death," said Bryan Hoddle, who was a high school track and field coach at North Thurston High School when Perot-supported paralympic sprinter Tony Volpentest reached out to him. "That's how much Ross meant to me and how his death touched me."The story of the relationship between Hoddle and Volpentest after they were brought together by Perot is a remarkable story of caring, not only on the part of the coach but perhaps more surprisingly, on the part of the hard-nosed business leader who twice sought to be president of the United States.The relationship between the coach and the athlete began as a series of links that came about by accident, or maybe fate, when in 1994 Hoddle's wife, Sherri, saw a television program on Tony Volpentest, a young disabled sprinter who had won three gold medals in the 1992 Paralympics in Barcelona.Volpentest, born without hands or feet, took some time off after the '92 Paralympics and before he could compete again he faced the problem that officials had decided his prosthetic leg was too long and provided an unfair advantage and would have to be shortened.Hoddle recalled that after his wife saw the television program, he had reached out to Volpentest, who lived north of Seattle, "so we met and formed a friendship.""When Tony decided to train for the 1996 Paralympics, he called me and we talked about how it could work for me to coach him and help get a new, shorter prosthetic leg," said Hoddle, noting that "Ross Perot had taken Tony as a cause and agreed to provide for all his expenses."When Tony talked to Perot about me coaching him, Perot agreed to pay me to be Tony's coach, and we started training in the fall of 1995. Perot was wonderful to my family and me."At the '96 Paralympics in Athens, under Hoddle's coaching, Volpentest bested his 1992 record 100 meters time by half a second and shaved two seconds off his 200 meter record time, winning the Gold medal in both.  When I interviewed with Hoddle soon after we first became friends a couple of years ago, he showed me several videos of his training work with Volpentest back prior to those '96 games and one showed the two men, each lying on a hotel bed talking face to face."What were you two talking about?" I asked."I was telling Tony that I knew he was going to win the gold medals in his events and that a lot of handicapped kids were going to want his autograph," said Hoddle. "So I told him 'you will stay until every kid who wants you autograph has the chance to get one.'"ABC did a special feature on Volpentest as he stayed after his victories and, as Hoddle had instructed him, signed every autograph of those who wanted one, many of them disabled youngsters. The signings went on for more than 90 minutes.The Volpentest experience led Hoddle to work with athletes with disabilities, including Marion Shirley, an amputee Hoddle convinced to try sprinting who then went on to win the 100 meters in the 2000 Paralympics as well as the 2004 games in Athens for which Hoddle had been chosen to be the head coach of the U.S. team.  Just after returning from Athens, Hoddle got a call from an organization called Disabled Sports USA, asking him to come back to Walter Reed Army Medical Center to do a running clinic for injured soldiers. That set him on his current course. He made three more trips to Walter Reed then began doing running clinics at Lakeshore Foundation in Birmingham, AL, which became a continuing commitment as Hoddle has made nearly 20 trips there.Those who know the Hoddle-Volpentest story may be forgiven for considering it to be one of the most significant coach-athlete stories in sports, a relationship that has continued to today with Hoddle now living in the Phoenix suburb of Chandler and Volpentest five miles away in Gilbert, AZ, where he works for Charles Schwab."Tony and I talked on the phone last night about Perot, and I reminded him 'if it wasn't for you wanting to have me coach you and Perot hiring me for you we wouldn't have had the money to adopt our second child.'"As it turned out, said Hoddle, the money Perot paid for the Volpentest coaching covered about but $100 of the cost for Steven. Hoddle recalls visiting Perot in the presidential box at the '96 Paralympics in Atlanta and "he took Steven and carried him around the box and the stadium."Hoddle is convinced that it was because of the attention Volpentest brought to the Paralympics that it has become the second-largest sporting event in the world, And that was with credit to Perot for making it possible without a lot of personal attention.