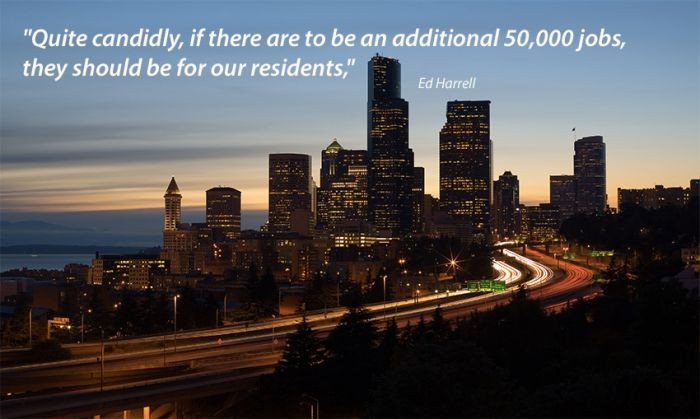 UPDATE: (Bellevue is planning to submit a bid to earn the role of Amazon’s HQ2, setting the stage for the possibility that the separate but equal headquarters that Amazon said lies ahead could find executives merely going back and forth across Lake Washington rather than flying cross country. Bellevue councilmember Kevin Wallace requested that the city work on a formal proposal to attract Amazon. Other councilmembers agreed that Bellevue’s business environment, ongoing infrastructure improvements and skilled workforce, make it a viable contender. Staff will return with an update on the process in the coming weeks. Responses to Amazon’s RFP are due by Oct. 19.)

Amazon's announcement that it is planning a separate but equal second headquarters has drawn enough comment, and criticism from some expected sources, that it's difficult to find an aspect that hasn't been explored or discussed. But the decision that Seattle should go after that second-city prize provides a new opportunity for thought, and perhaps some amusement.It's interesting, and maybe amusing, to take a close look at the idea from Bruce Harrell, Seattle City Council member and five-day mayor, that Seattle should seek to persuade Amazon to put the projected 50,000 employees that the electronic commerce and cloud computing giant says will work at HQ2 here in Seattle, along with HQ1."Quite candidly, if there are to be an additional 50,000 jobs, they should be for our residents," said Harrell, who briefly replaced Ed Murray after his resignation in the face of multiple child sex abuse claims. Harrell said he was directing staff to "examine the city's business retention strategy and make sure employees are considered."First thought: does Seattle really want to solidify its growing image as "the biggest company town in America" with up to another 50,000 Amazon employees?Second: does anyone in political leadership in Seattle recall that the city's role is as a "super-regional city" with the good of the region for which it is center meant to be a part of political considerations, not merely the good of the 600,000-plus who live within its boundaries?  And for amusement, if Seattle actually produces a plan to be headquarters city 2, might anti-business council member Kshama Sawant be willing to be part of the group of elected officials that would present the plan personally to Bezos and his executive team, letting them know the city care about their needs? But her presence might remind the Amazon execs of what some have suggested as one of the reasons for the company's decision to look for a second headquarters city, just in case -- the anti-business attitude of Sawant and he followers in city government. If the city has a business-retention strategy, to which Harrell alluded, that would likely come as a surprise to some members of the city council as well as to Murray and his predecessor, Mike McGinn, who was heard to remark to an aide at a business breakfast early in his only term "these are not my people."It's not known what fate awaits Harrell's executive order directing Seattle's economic development officials to respond to Amazon's request for proposals to be the site for what the company says will be a headquarters that cost $5 billion to build and operate and is expected to generate as many as 50,000 jobs.  Soon after issuing that order, Harrell stepped aside and turned the job of mayor over to Councilman Tim Burgess, who will serve until Jenny Durkan or Cary Moon is elected in November.Amazon's stated goal of uncovering a place for a second headquarters, and as many as 100 cities and regions around the country have indicated they will be submitting bids, is expected to inject a surge of money and population into whatever region is ultimately selected.  The company said it has added $38 billion to Seattle's economy between 2010 and 2016 and boasts approximately 40,000 staffers in more than 8 million square feet of office space.  With respect to the "one-company town" idea, that's a designation offered recently by one real estate expert who noted that Amazon's footprint in Seattle is estimated at 19 percent of Seattle's downtown prime office space, more than twice as large as any other company in any other big U.S. city.Of course, Seattle has long been viewed as a one-company town, first with Boeing, whose actual physical presence was dispersed across the Puget Sound area and beyond, then Microsoft, which was actually located in Redmond.Wouldn't it be an interesting idea if officials of the city that is supposed to understand that it is a "regional city" decided not to try to win the second-headquarters for itself but rather sell Amazon on the concept of keeping that second headquarters within the region, outside of Seattle? Thinking only of its residents seems to have become the sole consideration of a city elected leadership whose predecessors seemed to understand that as a super-regional city, the basis of Seattle's economy and political considerations isn't just its 650,000 residents, but the 8 million to 10 million people of the region.Tacoma hopes to be among the cities that seek to attract Amazon to consider them, and indeed Pierce County has a lot going on that doesn't get much attention from the Seattle area. So far in 2017, the Economic Development Board of Tacoma-Pierce County has conducted 21 site searches for companies looking to relocate to or expand in Tacoma or Pierce County.  And with respect to Bellevue, which hasn't indicated an intent to bid on any second headquarters, Amazon is already slated to occupy all 345,000 square feet of the new downtown Bellevue Center 425 Schnitzer West office tower when it is completed.    I asked Bellevue Developer Kemper Freeman Jr. if he'd be interested in attracting Amazon.  "Love to," he replied, "but we don't have any space right now," referring to the fact his new 400 Lincoln Square Office Tower and its 700,000 square feet of space is now basically all leased.