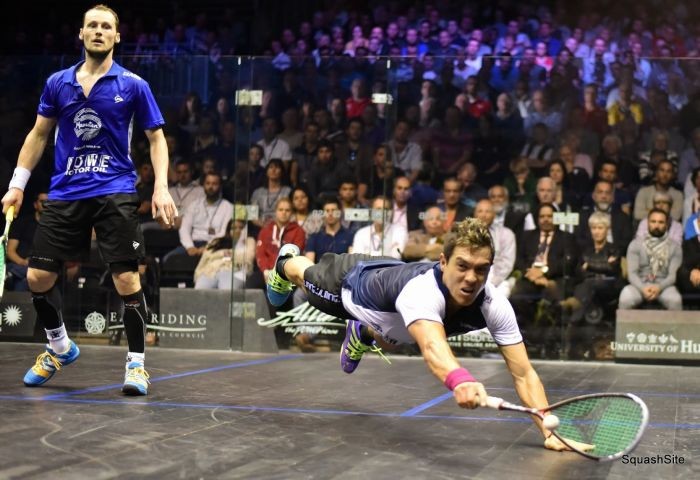 Shabana Khan is known globally in the sport of squash, recognition earned first as a national-champion player and now as a producer of national and international events that include a series of first-time competitive gatherings, all in Bellevue over the next three months. But she faces the frustrating irony that while she is putting the name of the Eastside's largest city on the world squash map, she has generated little attention or support from the city or its leadership. 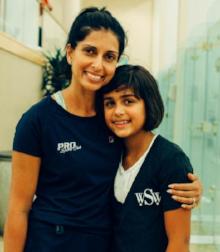 But she learned Tuesday that Microsoft has decided to provide a key sponsorship that will ease but not eliminate the financial pressure, as she has raised about $250,000 of a projected $350,000 in costs.
The comment about "little attention or support" may seem like a harsh statement, but I've been following Shabana's squash accomplishments since a month before the Men's World Championships in late 2015 when I was asked to help direct her to individuals who might support her efforts.

And except for a donation from developer Kemper Freeman to specifically allow her to say he was a supporter, and an unsuccessful effort by City Councilman Conrad Lee to enlist council financial support for the 2015 men's event, she has gotten only modest backing, mostly "friends and family," as she puts it.

Redmond's PRO Sports, which attracts many Microsoft employees from the campus across the street and where Shabana coaches, has been a key supporter.

In the end, despite the financial challenges faced by her YSK Events company, the men's world event, put on at Meydenbauer Center, came off well, prompting expressions of gratitude from squash participants and executives who gathered in Bellevue from around the world. A Frenchman defeated an Egyptian in the final match to become world champion in a sports event as exciting and competitive as any I've witnessed.

Before getting involved with the Shabana's men's-event initiative, I had little knowledge of squash, which is racket sport similar to racketball, played by two or four players in a four-walled court (glass walls for most international events that are broadcast globally) using a small, hollow rubber ball.

Later, as I learned how many of my friends and colleagues are or were avid squash players, I was informed that squash players and fans represent a highly targeted and sought after demographic of men and women with median incomes of more than $300,000 and an average net worth of nearly $1,500,000.

The website for squash notes: "Squash players are business owners and senior executives in upper management throughout corporate America along with research physicians, architects, attorneys, and accountants."

And Forbes magazine several years ranked squash as "the number one healthiest sport."

Shabana is the kind of business-of-sports figure, a lithe 48 year old who is a former national women's squash champion and one of the best in the world in her playing prime, who would be sought out for encouragement and support in most communities for her leadership role.

Her stature on the national scene of her sport was evidenced when last October, at the National Squash Championship in Philadelphia, she was honored with the award given each year for major administrative contributions to the sport, recognition for the men's world event.

But rather than gathering support, she told me that when she went to Meydenbauer to explore holding the 2017 events there, "They were very adamant for us to move this event to Seattle or some other city."

That prompted Shabana, in seeking another site, to find the Boys and Girls Club in Bellevue's Hidden Valley area, which she enthuses turned out to be a more ideal site, one excited about hosting the events as a showcase for the four-glass-walls court in its new facility.

The capstone of the events this spring is the first Bellevue Squash Classic, the sport's equivalent of a stop on the PGA tour that will bring 16 of the top players in the world to the Pacific Northwest for a $200,000 event described as "possibly the most lucrative event in tour history."

Khan is looking for a major sponsor, as well as event sponsors, for her array of events since Wells Fargo, which had the $25,000 sponsorship and wound up with its name carried around the squash world since all the matches were streamed worldwide, has for various reasons not renewed.

The kind of community support she wishes she could find in Bellevue is something that would be a given in other communities that had the opportunity to have the brass ring as emerging center of what is becoming an increasingly popular sport in many places around the world.

And the growing popularity has apparently seen this country emerge as the third fastest-growing in the world for the sport.

"We support this opportunity to showcase the diversity and talent of these players from around the world," she said. "It's an opportunity to keep politics out and focus on the diversity that brings communities and countries to get together celebrating athleticism and skill."

"Her squash efforts represent an example of cultural experiences that deserve support," Lee said. "We don't have things that attract people from other parts of the world to share and thus this is an important opportunity, particularly the focus on events for young people."

And the focus on young people will be highlighted by the second West Coast College Showcase, a new event she created last year to expose what she describes as "unfound squash talent" to college coaches from around the country who gather to find the young people they want to recruit.

YSK Events, which she founded three years ago to focus on squash events, is a family affair in several ways. She serves as CEO while her younger brother, Murad, serves as president, and sister Latasha, who was women's national champion when Shabana defeated her to take the crown, is vice president for business development. It's also a family affair in that the "Y" in YSK stands for both her 10-year-old daughter, Yasmine, who is 15th in the country in her age group, and her father, Yusuf, who was nine-time India champion when the Seattle Tennis Club hired him in 1968 to come to Seattle to be head tennis pro. The "S" and the "K" are her initials.

I learned the import of the name Khan because of an exchange with my former UPI boss, now retired in Connecticut, who reached out to me after my first column on Shabana in late 2015 and shared that the reason I couldn't get hold of him during the afternoons, when I would call his New York office from Los Angeles was that "we were all out playing squash."

But when I was told him I was going to take some squash lessons from Shabana, he said: "Are you telling me you are going to get private lessons from a member of the Khan family? You can't know how jealous I am."
Tweet
Tags:
Mike Flynn shabana kahn squash bellevue washington
High court's ruling on new wells stirs concern in ...
Joe Galloway's 'hard duty' eulogy for friend, Hal ...