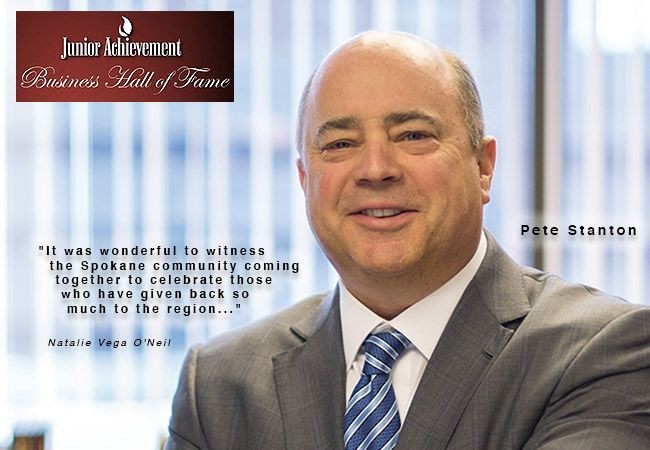 When Washington Trust Chairman and CEO Peter (Pete) F. Stanton was honored last week in Spokane as a laureate of that community's Junior Achievement Business Hall of Fame, it was appropriate recognition for the fourth generation leader of the state oldest and largest privately held commercial bank.It was appropriate in part because, with the Puget Sound Business Hall of Fame event not held this year, for the first time since it was created in 1987, the Spokane event is the only recognition of lifetime business achievement being held in the state this year.Stanton was honored, along with Jack Heath, Washington Trust's president and chief operating officer, and local business executives Penn Fix and Debra Shultz of Dodson's Jewelers were also honored as laureates at the Spokane JA organization's 18th annual Hall of Fame.Natalie Vega O'Neil, President & CEO of Junior Achievement of Washington, attended the Spokane event and got her first taste of Hall of Fame events."It was wonderful to witness the Spokane community coming together to celebrate those who have given back so much to the region," she said.

Stanton has guided the fortunes of Washington Trust since Pere's great-grandfather bought the bank, founded in 1902, in 1919.

Stanton was 34 when in 1990 he assumed the role of president, second youngest bank president ever in Spokane, second only to his father, Philip Stanton, who had become president of the bank in 1962 at age 31.Pete Stanton has been chairman and CEO since 2000, the year he named Heath president.In an interview we did a few years ago, Stanton explained the success of his bank during the 2008 to 2011 period when many other banks, including three local competitors, fell into disaster."When something has been in your family for four generations, stewardship becomes very important," he said."That doesn't mean we spend our time looking in the rearview mirror," Stanton added."We're focused on the future, but securing that future has always led us to have concentration limits on our lending."It was that "limit on concentration" that allowed Washington Trust to avoid the disastrous rush into real estate and construction lending that felled a large number of banks, including three of its locally based competitors, although Stanton's bank found itself eating some bad loans.Sterling Savings Bank, publicly traded and about twice Washington Trust's size, and American West, about half its size, ran afoul of bad loans and wound up eventually being acquired, though Sterling re-emerged under new leadership and returned to successful operation before being acquired by Umpqua Bank.During that time of financial trauma for many banks, Stanton's bank went on an acquisition and growth path that brought it to a network of branches spread across three Northwest states. including a large and growing presence in the Puget Sound area.Stanton suggests that Washington Trust's success is built on what he refers to as "our three pillars of real strength: commercial banking, private banking, and wealth management."Meanwhile, while there has not been any formal announcement of the fact, the Puget Sound Business Hall of Fame is not being held this year. JA's leadership transition that brought O'Neil aboard and budgetary challenges resulted in the halt to the event created in 1987 by JA and Puget Sound Business Journal.Because the JA organization has become Junior Achievement of Washington, its statewide role has meant that business leaders from across the state need to be considered for inclusion on the Puget Sound Business Hall of Fame. Thus far only Leroy Nosbaum, the CEO of Itron, was a Spokane business leader inducted as laureate.And that statewide role now has prompted discussion, particularly among members of the laureate selection committee, that the Hall of Fame event, if and when it re-emerges, should be rebranded as the Washington State Business Hall of Fame.O'Neil has indicated the array of events that JA puts on each year will be evaluated over the next few months, presumably to determine which will continue.But she did announce that a new Puget Sound Business Hall of fame display will be unveiled soon at the World Trade Center in Seattle.As co-founder of the event, with JA, 31 years ago and part of the selection committee since then, I've been on hand each year as the business community leadership has looked on while a new class of their most admired and successful predecessors was welcomed to the laureate ranks. Thus it's difficult for me to imagine that there won't be a 2019 JA Hall of Fame banquet.