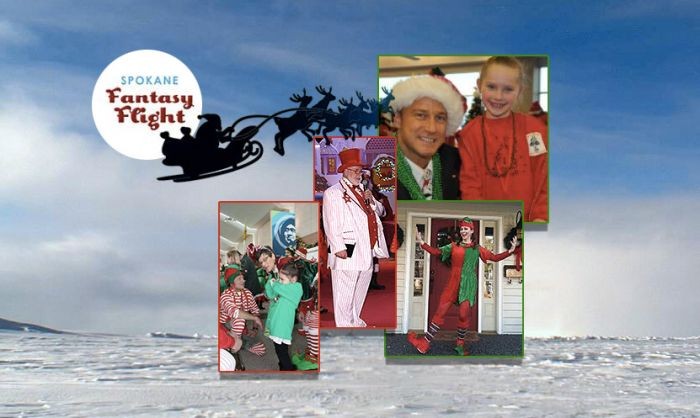 Steve Paul likes to say he has aged dramatically in his 17 years guiding the annual North Pole Fantasy Flight from Spokane International Airport, a magical trip for which Alaska Airlines provides a 737-900 to carry a planeload of orphans and foster children and their elves to Santa's home. Paul, who was 43 in people years when he first got involved in 2000, says his elf age as Chief Elf Bernie is 907 years, but that is really only middle age for elves so he still has a ways to go.Paul, president, and CEO of Northwest North Pole Adventures, the nonprofit group that runs the event and raises the funds for it over the course of each year, is reflecting on last Saturday’s 10th year of partnership with Alaska and the magic that again unfolded this annual flight to the North Pole to meet with Santa and Mrs. Clause.The children, ages 4 to 10, from shelter programs in Spokane and Coeur d'Alene, ID, are brought to the airport and each meets his or her "buddy elf," volunteers selected over the course of the year.

Then, with the help of the TSA workers, who look the other way as metal jingle bells on the kids' and elves' clothing set off alarms, they all pass through security and board the Alaska flight. It's flight 1225 until the jetliner is aloft, then it becomes Santa 1.
Before boarding their plane, the children are fed and receive backpacks filled with school supplies, winter woolies and a T-shirt that says, "I Believe" on the front and "I've Been to the North Pole" on the back. Then their "passports" are validated with the "North Pole Approved" stamp and they're on their way to a magical time the elves, Elf Bernie and Alaska's employees will try to make unforgettable.

"When we send out invitations to the kids who have been selected, we have them give us a wish list of what they want for Christmas," explains Paul, who refers to himself as "a believer in impossible things."  "We take those lists and buy each of them a toy from that list, so as each child tells Santa what he or she wants, Santa can reach into his bag and pull that present out for them. The looks on their faces as he hands it to them is priceless."

As evidence that nothing is left to chance, Paul, who in his less magical role is senior IT project manager at Ecova, a national energy management company based in Spokane, told me the elves are advised on how to play their roles convincingly. That includes when they choose an elf name they are told: "make certain your elf character fits you and get comfortable with your new identity."

The elves' prepping includes knowing how to answer questions from the children. For example, if asked what their jobs are, they say "I fix broken toys, using toy tools," and if asked how old they are, to say "I am 438 this year which is still young for an Elf."

Paul guides all details of the event through the year, preparing for the flight, working with social agencies that select the children, gathering sponsors and overseeing details like elf selection.

United was the airline partner for the first eight years and provided the little organization that was then called North Pole Adventure with a plane that, once loaded with the children, taxied around the airport before coming to a stop at Santa's place.
But when United was unable to provide a plane in 2007, Paul recalls: "we threw together the 'magic buses' to get from the Terminal to the North Pole."
For the 2008 flight, Paul approached Alaska, which he notes "is, of course, more familiar with the North Pole than any other airline." Its executives said "sure" and asked, "why can't we actually take off with the kids?" So, in fact, they did, carrying 60 kids and their elves aloft for a 20-minute flight to Santa's home. And so it has been since then.
"Honestly, Spokane is the North Pole and we have an airline that is passionate about serving this adventure," Paul enthused.

I asked Diana Birkett Rakow, Alaska's vice president of external relations, for a quote to sum up the airline's commitment: "Alaska Airlines has been proud to bring joy, and generosity to some kids who need a little holiday magic," said.  "Our employees have stepped up for 10 years to take kids on the ride of a lifetime.  It's the magic of giving back that makes the holidays so worthwhile."

Perhaps the most visible in his commitment is Alaska pilot Eric Hrivnak, who shares the duties at the controls this year with Michel Baumgartner. Hrivnak has been a pilot at the controls for a half dozen or so years by being at the front of the line as Alaska employees sign up for roles. He was beaten to the request by another pilot three years ago so made sure that wouldn't happen thereafter.

Hrivnak and his Alaska crew are part of the magic since as the flight nears its conclusion, the passengers are told to pull the window shades down and chant the magic words that will allow them to land at the North Pole.

As the kids pull down their shades and do a chant, each wave a magic light wand they were given as they boarded and then Hrivnak deploys the engine thrusters when Santa and Rudolph appear on the radar screen, providing the confirmation that the "Santa 1" flight has entered North Pole airspace.

The jetliner taxis to a hanger on the other side of the airport, where the passengers are greeted by a group of elves, with live reindeer milling about, and are they taken to meet Santa and Mrs. Clause.

Paul's planning for the future includes both preparing for passing the torch at some point, creating a more reliable funding source and having a plan in case some other Alaska-served city wishes to do its own event.

"This year we offered a 'boot camp' to Alaska Air for any other stations that would like to learn and start building their own version of the Fantasy Flight," he said. "Not sure we'll have anyone attend this year, but it's part of our go-forward plan."

In terms of torch-passing, Paul said he continues to "look at what I personally do that can be delegated. I spend more time after the event documenting what I did, what I re-did because of a change."

And he says the event had its first fundraising auction in September, raising "above our first-year goal. This will be an annual event each September."

I first learned of the event in 2011 from my friend, Blythe Thimsen, then editor of a Spokane magazine who was to be an elf that year, an experience she shared with me then subsequently wrote about and sent me a copy of the article.
Retelling and updating this story has been my holiday gift to readers of The Harp since then because it's a story of human caring and compassion that not only won't get old but perhaps becomes more needed each year. I like to refer to it as "the magic dust of caring" that descends over all those involved.
--------------------------------------
Spokane isn’t the only holiday flight for Alaska Airlines, incidentally.

Since 2006, Alaska has donated cargo shipments to the Alaska Toys for Tots program, shipping thousands of pounds of toys to regional hubs so that they can be distributed to children throughout rural Alaska.

Alaska’s involvement in the program is especially important since only three of the 19 communities involved are accessible by road.

Another tradition for the airline in its home state is the Flight to Adak, a tradition started in 2005 by now-retired Alaska Captain Rex Gray who with his flight crews would purchase toys for the roughly 30 children who call Adak home and who gathered at the airport as the plane arrived. After the passengers cleared the aircraft, Gray would quickly change into his Santa costume, and carry the toys off the plane with the help of the rest of the flight crew dressed as elves.

Today, Alaska Captains and Flight Attendants carry on the tradition, coordinating with the City of Adak, which is located in the Aleutian Chain nearly 1,200 miles from Anchorage with its own time zone, to purchase an age-appropriate gift for each child in Adak.

The crews and local Adak station employees host a community reception at the Adak terminal, where each child is called up by name to receive their gift and a photo with Santa
Tags Mike Flynn people
PRINT