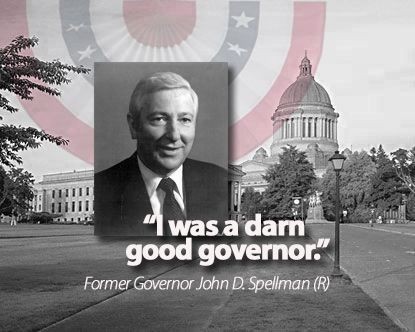 It’s virtually certain that Gov. Jay Inslee will be re-elected on November 3 to a third term as Washington’s chief executive, which means that by the end of this term it will have been 44 years since a Republican was elected to the state’s highest office.

So the fact that for nine consecutive elections, with number 10 on November 3 all but certain, the state’s voters have opted for the Democratic candidate must give those who care about such things pause to wonder what kind of governor was that last one from the GOP. After all, he set the stage for the nation’s longest gubernatorial losing streak by either party.

(Frmr) Gov. John D. SpellmanSo when thinking of that political oddity, I often reflect on an interview I did with that last Republican, John D. Spellman, 10 years ago on the 30th anniversary of his swearing-in. I asked him: “what kind of a governor were you?”

So Spellman, who died in January 2018 at the age of 91, replied with what I described as a twinkle in his Irish eyes, “I was a darn good governor.”

And there’s much that happened during his single four-year term, a time when the state faced what may have been its worst economic challenge up to that time, to justify that assessment from a historical perspective.

But it would have been difficult for many who were there at the time to agree since during his 1980-84 term as governor he managed to make decisions that irritated almost every segment of the political spectrum.

One such decision came about because of his strong commitment to environmental protection when he used his authority to prevent permitting for what he felt was an environmentally risky development project in a sensitive shoreline area of Whatcom County.

He made that decision in the face of enormous pressure from business groups and many legislators, but most notably, he turned down a direct request from President Ronald Reagan because, as some who knew Spellman later observed, integrity came before pressure, even from the president. Imagine that in this day and age.

I often passed Spellman, then in his early 80s, in the lobby of what was then the Columbia Center Building en route to his office at his Seattle law firm, Carney Badley Spellman, where he was still putting in four days a week and we’d pause to catch up.

Spellman, handsome and personable with a winning smile, was a graduate of Seattle University then Georgetown Law School. His ever-present pipe would be lit and relit during lengthy discussion sessions, some of which we had in the lobby of the Columbia Center when pipe smoking was permitted.

Among the decisions that he knew would face stiff opposition were those related to taxes.

“We passed more taxes in my four years than they have before or since," Spellman recalled in our interview.. "One of the challenges in seeking to get re-elected was that I said I would raise taxes only as a last resort and some people took that to mean I wouldn't raise taxes.”

"We had a crisis, as evidenced by the fact we had a 13.6 percent unemployment rate at one point, and in crises, you have to act," he added. "People didn't elect me to do nothing."

Spellman practiced politics in a long-gone era when Republican elected officials could be moderate enough to sometimes find Democrats to the right of them.

In fact, those interested in political history might find it intriguing that the Democrat who defeated Spellman after his single term was Booth Gardner, Harvard Business School graduate, a successful businessman and heir to the Weyerhaeuser fortune.

The other intriguing political oddity in this state relates to the office of Secretary of State, where the election drought is for Democrats, and it's two decades longer than the governor post.

A Democrat was last elected to the position that oversees state elections 60 years ago, in 1960.

The four men who held the role, leading up to the election eight years ago of current Secretary of State Kim Wyman, treated it as a nonpartisan job, according to prominent researcher and pollster Stuart Elway.

“And a lot of voters feel better about themselves if they don’t just vote a straight ticket, all Democrats or all Republicans, so they look for a place they can vote the opposite party,” Elway offered. “And the Republican secretaries of state made voting the ‘opposite’ party easier because they were good custodians of the office.”

Many observers from both parties agree that Wyman who, like Inslee, is seeking a third term, has done a commendable job handling the elections that constitute the position’s most important responsibility.